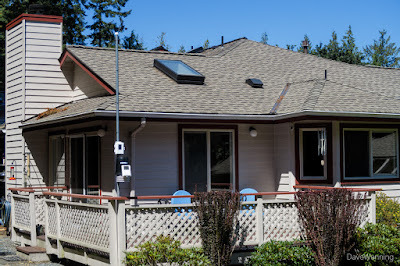 I have been in the new house a little over three weeks.  I am now living inside the town of Anacortes, Washington.  This past weekend, I got the weather station installed after a month offline.  I got it up just in time for an expected heat wave coming this week.  Up north here we are looking at temperatures in the upper 80's F, around 31° C.  Seattle is expecting 99° F, 37° C, while the Portland/Vancouver area is looking at 105° F, 40 C.  These are temperatures that belong in Arizona, not the Pacific Northwest.

The station setup is not ideal, but few of us actually have that luxury.  At the previous house on South Fidalgo Island, I had separated the anemometer mast from the other sensors, putting it more out in the open.  Even though everything is together in one place now, I elected to keep the two separate power supplies and transmissions.  This seemed prudent to preserve battery power.  During the day, the batteries are charged by solar panels, but overnight, the batteries provide all the power.  I have posted previously about the station hardware and the complete weather station setup that I use. 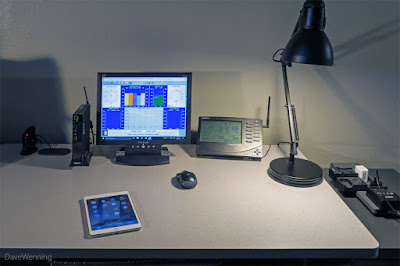 Almost immediately, the station console picked up the signals and began recording data as if nothing had changed.  The only glitch occurred when making the USB connection between the console and PC server.  I got the dreaded "Station not found" error message.  Restarting the PC solved that problem, and the station is now on track, uploading data to the internet.  The station is reporting data for Creekside Village, Anacortes, Washington.

Yesterday, I got all the new location parameters adjusted, latitude, longitude, elevation, etc.  Today, I got the station re-registered with Weather Underground (new ID KWAANACO65), and the National Weather Service CWOP (new ID FW1394).  At Weather Underground, my South Fidalgo station was Anacortes number 8.  Now I am Anacortes number 65 which is making me look like a noob.

The station has been offline almost exactly a month.  Nothing significant was missed during that time, weather-wise.  There has been no measurable rainfall and no unusual high or low temperatures.  It has been sunny and moderately warm the whole time.  I expect we will be getting our high temperatures for the year this week and possibly later in August.

My new computer work stations are also finally getting organized.  I actually have more work space now than in the old house.  I still have book shelves to put up, and I am just beginning to get a handle on storage with a lot of stuff remaining in boxes. 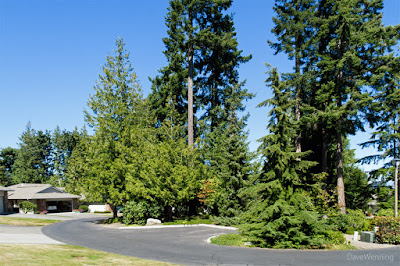 From the window in the computer room, I look on a cul-de-sac landscaped in the Northwest style.  It includes a grove of mature Douglas Firs wisely preserved by the developers.  This appears to be a playground for squirrels and it provides me a shady shortcut to the mailboxes. 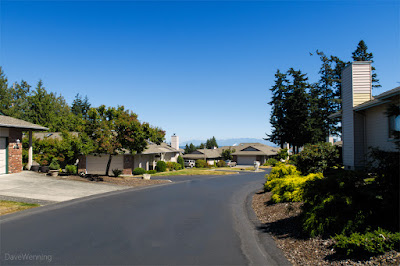 I am enjoying living in this new community.  Another goal for my retirement has been accomplished.  Based on the roster I was given, there are about 72 townhouses altogether, plus or minus.  Now that I am here, Creekside Village has a functioning weather station of its own.  I am also happy to get back to blogging again.  After the upheaval of moving, it feels like things are getting back to normal.