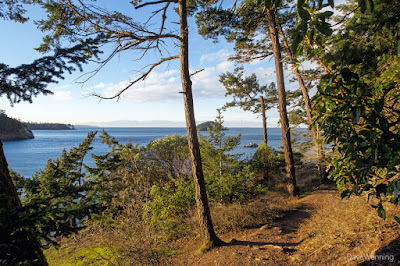 Winter here, in the classic sense, begins in December and runs through early to mid January.  This is when temperatures at or below freezing occur.  Since Christmas, we have been experiencing temperatures well below freezing accompanied by sunny, blue skies. That's about to come to an end now with rain forecast for this weekend.  I decided I better get one more hike in before this happens.

Early yesterday morning I headed for Bowman Bay in Deception Pass State Park to hike the Bowman-Rosario Trail.  This is always a good choice for beautiful scenery. interesting nature and frequent wildlife encounters.  It also provides a little terrain for a bit of exercise.  It begins at sea level, rises to skirt the cliff edge over Bowman Bay, then returns to sea level at Rosario Bay. 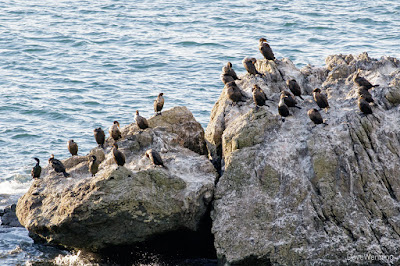 When I set off, the temperature was right at freezing, 32° F, 0° C.  The temperature wasn't as bad as the biting wind that accompanied it.  Even the Cormorants in Bowman Bay were hunkered down in the wind. 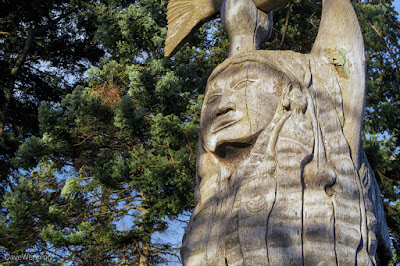 At Rosario, I always pay my respects to Ko-Kwal-alwoot, a Samish girl who was courted by a sea spirit.  To save her people from famine, she accepted his proposal, and was transformed into a sea spirit herself.  It's a story of personal sacrifice for the good of the community.  The Samish story pole has two sides representing her two lives, one as a human and the other as a spirit.  This side with kelp leaves for hair is her spirit side.  It faces east to greet the morning sun.  It is said if you look down into the water from the Deception Pass bridge, you might see here hair drifting with the currents. 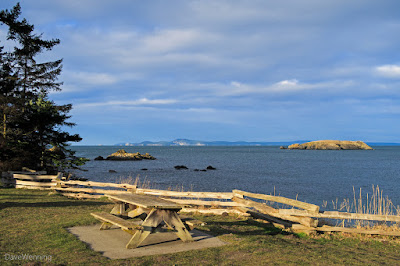 The islands and rocks in Rosario Bay are painted a golden color by lichens.  This is enhanced by the "golden hour" of early morning sunshine.  Across Rosario Strait, Lopez Island in the San Juans can be seen. 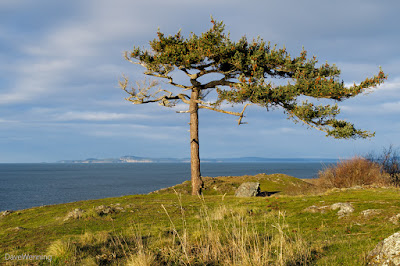 The iconic Douglas Fir atop Rosario Head is evidence of the persistence of life.  It grows from solid stone and endures almost constant winds during the winter.  Its size most certainly belies its age.  Despite (or because of) the harsh conditions, the tree produces cones every year. 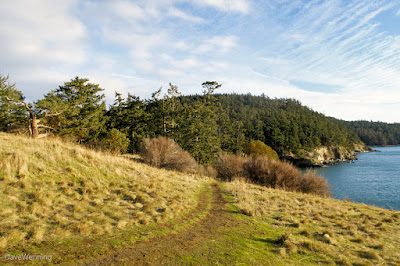 Imagine standing on this exposed headland in freezing temperatures and a brisk wind.  The warm, golden-tinged hues don't reveal the actual conditions.  If you enjoy the outdoors, however, it's not bad.

Cirrocumulus undulatus clouds create a striped pattern in the sky.  They may be predicting an approaching warm front and rain.  Has anyone else noticed how difficult it is to find a decent website for identifying cloud formations?  I would appreciate hearing suggestions on good reference sites for cloud types. 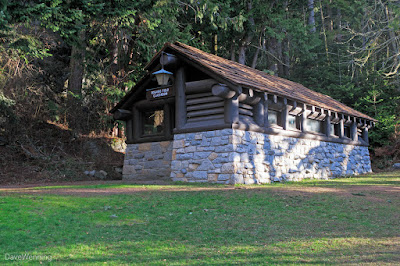 In the 1930's, Deception Pass State Park was built from wilderness by the men of the Civilian Conservation Corps.  An example of their work is this bath house at Rosario, now restored and repurposed to serve as a field classroom.  It sits next to the trail back to Bowman Bay.  The timbers, stone and roof shakes are all materials from on site.  It would be rare to find such craftsmanship in modern park buildings anywhere.

For anyone interested in the history of the park, I can recommend the book Two Hands and a Shovel. an amazing collection of vintage photos, first hand experiences and history.  It pays homage to the men of the CCC's.  For exploring the modern park, check out Exploring Deception Pass.  The proceeds of both books benefit the Deception Pass Park Foundation. 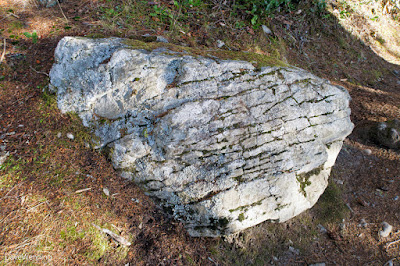 The cracks in this stone next to the trail provide a foothold and a little moisture for moss.  Nature has a knack for finding even the tiniest opportunities to exploit. 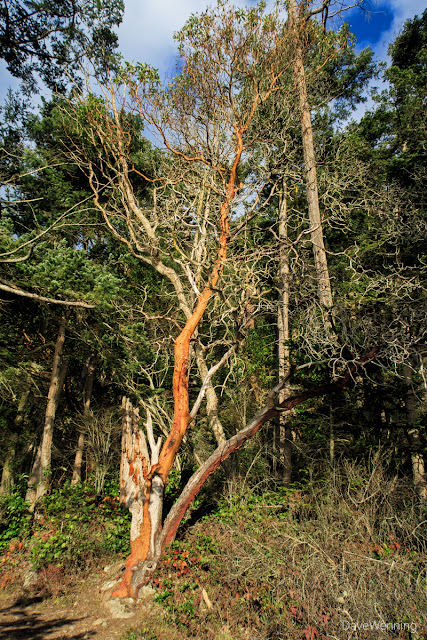 Grandmother Madrona is showing her age, but is still going strong.  The broken trunk and dead sections are evidence she has suffered a lot of hardships.  Nevertheless, these "wrinkles" only add to her beauty and charm. 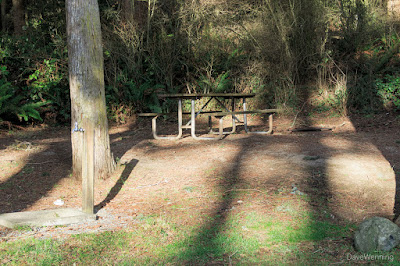 In 1958, this was our campsite (no. 283) at Bowman Bay.  I was twelve years old, here with a best friend from school and his family.  Back then, the fire pit was down in front, near the road.  In my mind, I still feel the warmth and smell the smoke of that fire.  Another memory was the young Bald Eagle we startled as we came around a bend on the Bowman-Rosario Trail.  The startling was mutual.

It is amazing to think my history with Deception Pass State Park spans almost sixty years.  In those days, it was a long drive to get here from where I grew up in south Puget Sound.  Also interesting, when I posted this collection of photos on Twitter, this was the one that got the most attention.  It's not beautiful, scenic, unique or interesting in any way, but it seemed to strike a chord. 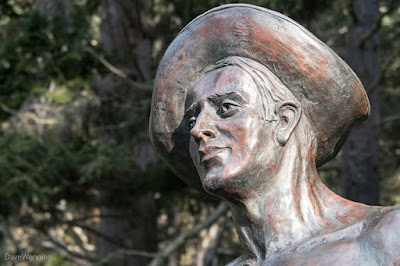 This statue at Bowman Bay honors the workers of the Civilian Conservation Corps who built the park.  He is facing back towards Ko-Kwal-alwoot at Rosario, acknowledging their shared importance in the long history of Deception Pass. 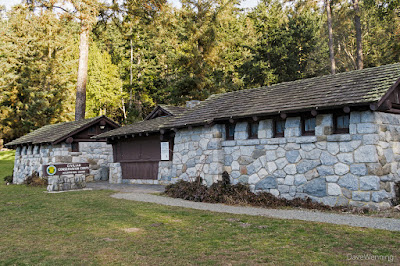 Another repurposed bath house now serves as the Civilian Conservation Corps Interpretive Center at Bowman Bay.  If you are a history buff and find it open, don't pass it by.  It is a fascinating museum containing period artifacts, vintage photos and a video that tell the story of the CCC's and the park's beginnings.  Anyone interested in the history of the thirties and forties will enjoy it.

Bath houses were apparently popular in the 1930's.  It is interesting that none of them originally built for the park are still in use as such.  The fact is, the waters here are much too cold for swimming.  It is fortunate that these exquisite, hand-crafted buildings received new lives educating park visitors.  If you want to swim, go over to Cranberry Lake at West Beach on the Whidbey Island side of the park.

By the time I got home, the temperature had risen to 36° F, 2° C.  By mid-January, or so, we should should start to enter our "early spring," weather-wise.  By February, many native plants will be blooming.  Today, I am watching the overcast roll in to prepare for the expected rain and/or snow tonight.  Thanks for joining me on this hike.