September 28, 2016
In a previous post, Barking up the Right Tree, I introduced the trunks of six trees seen along local hiking trails.  The task was to try and identify them using only their bark.  This post will reveal the trees in the photos.  I have added a seventh tree here that was not in the first post.  These are the "seven biggies" you are likely to encounter while hiking in local forests.

Normally, trees are identified by their leaves, scales or needles.  But in a mature forest, it my not be possible to see them in the canopy.  During the winter, deciduous trees drop their leaves, so other features must be used for identification.  Bark may be all we can see from the trail.  Click or right-click the photos to see larger versions. 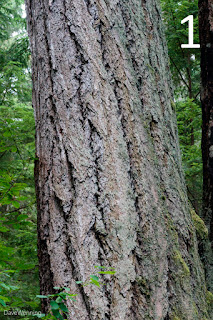 This is the king of conifers in the Pacific Northwest.  In a mature tree, the bark is the craggiest and roughest of all with deep furrows forming long, wide strips.  It is the craggy, rugged old man of the forest.  On the other hand, the bark of young trees is smooth with numerous pitch blisters as with your Christmas tree.  In size the Douglas Fir grows second only to the California Redwood (Sequoia sempervirens.)

Interestingly, the Douglas Fir is not a fir at all.  Unlike true firs, its cones point downward.  Its genus name means "false hemlock," so it's not a hemlock either.  The genus Pseudotsuga includes two other North American species and three in China and Japan.

The Douglas Fir is the state tree of Oregon. 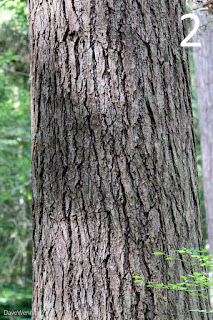 One of the commonest trees in this area, if it's not a Doug Fir, it's probably a Grand Fir.  Carrying the genus name Abies, this is a true fir with cones that point upwards.  The furrows in the bark are shallower than the Douglas Fir.  They demarcate narrower strips with a lower profile.

On the trail, it can be difficult to distinguish from the Western Hemlock (#3 below).  The strips on the Grand Fir tend to be longer, wider and more continuous with a slightly concave surface.  The surface can be smooth, and sometimes even shiny.

In very old trees, the furrows look stretched apart and may take on a yellow-rust color.  The overall look is rugged, but less so than the Douglas Fir. 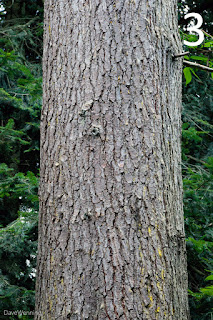 In general, I would characterize the bark of Western Hemlock as more refined compared to the ruggedness of the Grand Fir.  For a positive ID, you might have to catch a glimpse of the needles which are shorter and finer compared to firs.  The branch tips will be feathery and pointed, whereas the fir tips are more blunt and solid looking.  From the ground, of course, it may not be possible to see the needles hidden in the canopy.

Western Hemlock is the state tree of Washington. 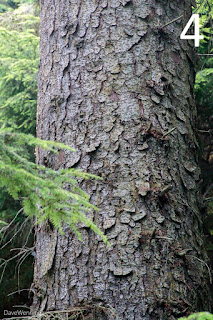 A patchy, shingled look is the distinguishing characteristic of Sitka Spruce bark.  Like shingles, the patches tend to flare out at the bottoms.  It can also be identified by its unique wavy-scaled cones found scattered on the ground around the trunk.

It requires moister conditions than the Douglas or Grand Fir but can be found growing with them.  Also, find it close to salt water.  It grows to be the largest species of spruce and the fifth largest conifer in the world.  On the other hand, exposed to ocean winds, it may be stunted and shrub-like.

The Sitka Spruce is the State Tree of Alaska. 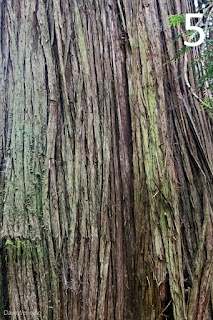 The Western Redcedar is another Pacific Northwest misnomer.  It's not a cedar, but an arborvitae, a member of the cypress family.  There are no true cedars (Cedrus) native to North America.  It has probably been called cedar because of the appearance and fragrance of the wood.  Both are splendid.

The bark appears to be made of long, loose, fibrous-looking strips.  In the forest, it often has a green or blue-green color caused by dust lichen.  Trees usually have a wide base tapering quickly into a straight trunk.

Local native peoples knew how to harvest the bark without damaging the tree.  It was used to make cordage and textiles.

Western Redcedar is the official tree of British Columbia. 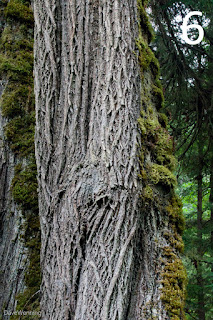 Eponymous big leaves, more than a foot across, characterize the Bigleaf Maple.  Find it growing in mixed conifer forests, where the canopy has opened to let in light and where there is adequate soil moisture.  It becomes a beautiful shade tree, but grows much too large for the average garden or street planting.

The bark can be more variable than on the other trees here.  The distinguishing characteristic to look for is luxuriant moss growing on the trunk and branches.  Through the winter, small Licorice Ferns (Polypodium glycytrhiza) sprout from the moss on older trees.  The three plants, maple, moss and fern form an aerial ecosystem.  Soil will accumulate under the moss providing habitat for worms and insects and thus food for birds and small mammals.  Sometimes the weight of wet moss can cause branches to break off the tree. 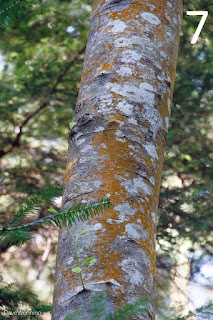 I didn't include Red Alder in the first post, but I should have.  When I built my house, I didn't get the landscaping in right away.  Very quickly, I had hundreds of Alder seedlings coming up like weeds everywhere.  This is useful lesson about their nature.  In forest succession, Alder is considered a pioneer species.  After land is cleared by logging, fire or home building, these species will attempt to repopulate the bare ground.  It will grow fast and live a relatively short life.  Seasonal leaf drop and nitrogen fixing will help nourish the soil, getting it ready for a new growth of conifers.  It is also a useful species for stabilizing slopes and attracting wildlife.

A member of the birch family, the bark of Red Alder is gray with with white or lighter gray patches.  Some trees will have patches of orange lichens or other epiphytes.

All of these photographs were taken in the Hoypus Point Natural Forest in Deception Pass State Park.  These seven trees are the most commonly seen in our local forests.  Next time you take a hike in the woods, see if you can identify them all.
Deception Pass Nature Trails Trees