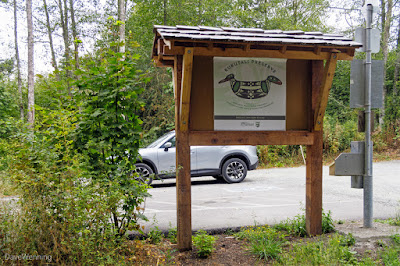 I rambled through the Kukutali Preserve yesterday.  Today I'll ramble a bit about what I saw there.  After non-stop sunshine during most of July, the morning gave us an overcast sky with temperatures around 60° F, 15° C.  Rain was threatened, but mostly to the south.  By my reckoning, this is perfect weather for both hiking and photography. 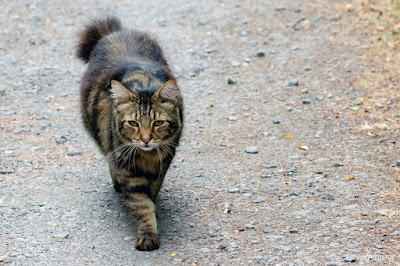 As I set off, I was greeted by Kukutali Kitty who gave me a welcoming rub on the ankle.  My ownership had been established.


Hiking along the road, the first thing I noticed was all the summer fruiting going on.  Left to right from top to bottom: 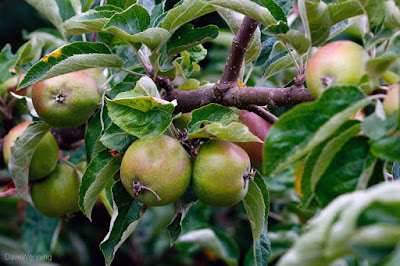 It is not uncommon to find feral apple trees around here that have escaped cultivation.


We are now in the summer wildflower season.  Left to right: 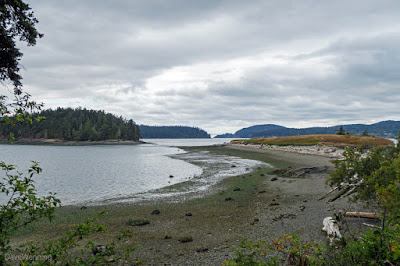 The south beach along Flagstaff Island is off-limits during August and September.  That rules out checking on the resident Oystercatchers right now.  I did hear their high pitched calls, so I know they're still around. 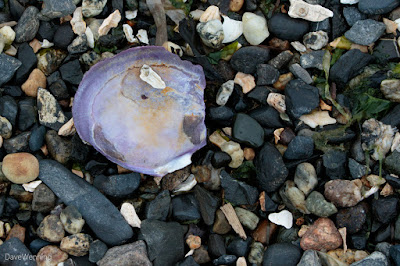 The north beach along the Flagstaff tombolo is open during August, but closed in September.  I have been trying to find out the reason for these intermittent closures.

Here I spotted this broken shell of the Purple Varnish Clam (Nuttalia obscurata).  This is an Asian species that was introduced in the early 1990's by the dumping of ballast water into Vancouver harbor.  The clam has quickly spread throughout the Salish Sea.  It has become a favorite food of Dungeness Crab which may be responsible for so many broken shells on local beaches.  I'm guessing the Oystercatchers like them also.  The outside of the shell looks like it has been coated with varnish.


Also on the north beach, this odd plant is American Glasswort (Salicornia virginica).  It is a halophyte allowing it to grow in the intertidal zone in salt water.  Also known as Pickleweed and Sea Asparagus, it can be eaten.  It will add a salty flavor to salads and rice or pasta dishes.

Effects of our summer drought were apparent throughout the Preserve.  The last measurable precipitation here occurred on July 9th, and that only amounted to 0.14 inches/3.5 mm.  Some will be surprised to learn that the Pacific Northwest can be the driest section of the country this time of year.  Our native plants and trees have adapted to these conditions.  They look poorly and fall-like now, but will recover when the autumn rains return.  The Nootka Rose in the upper right photo is growing at the west end of Kiket Island.  Exposed to wind and unprotected by shade, it is looking almost dead right now.

While I was crossing the causeway back to the parking lot, I got sprinkled just a little.  It was negligible, however, not nearly enough to do any good.  This is typical in the Olympic Rain Shadow.  By the time I got home, the skies had cleared and the sun had come out. 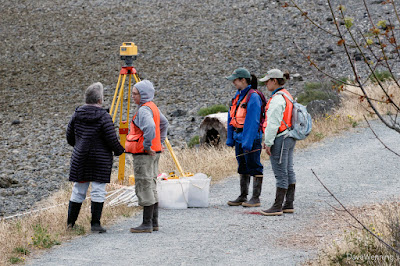 As I approached the tombolo causeway on my way back to the parking lot, I encountered some Kukutali Preserve staff.  They were setting survey markers to assess erosion of the tombolo.  Years ago, rip-rap had been placed along the north side.  Tidal action has now washed behind the stones.  Instead of protecting the shoreline, the rip-rap may actually be contributing to its erosion.  Kukutali is not only a culturally important place to the Swinomish people.  As one of the last remaining natural islands in Puget Sound, it is also a site for scientific research.

I came looking for nothing in particular, but ended up finding a lot.  There always seems to be an abundance of interesting things to discover around here.