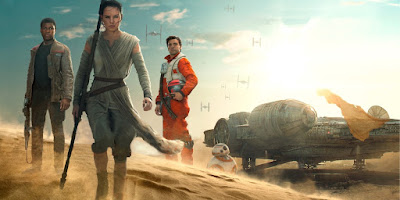 Sometimes writing about a bad experience and disappointment is helpful.

In 1977 I saw the first Star Wars movie A New Hope at the Lindale Plaza shopping center in Cedar Rapids, Iowa.  (I went to graduate school in Iowa and ended up living there for nine years.)  That movie was magical.  When I came out of the theater, the world had changed.  I have not experienced anything quite like that feeling with another movie since.

I enjoy good movies and try to watch as many as I can.  I am especially fond of science fiction.  I subscribe to all the movie packages on cable and I have an Amazon Fire TV box.  They give me access to everything I want.  The last movie I saw in a theater was Forrest Gump more than 20 years ago.  I enjoyed it immensely.

In January, I had to take my car into the dealership for servicing.  They said they would need it for about four hours.  I was dreading the thought of sitting in a waiting room.  What to do?  They had a shuttle service that could run me over to the Cascade Mall in Burlington where the new Star Wars movie The Force Awakens was playing.  That got me excited.  The show times were published on the internet.  The matinee schedule fit my car appointment perfectly.  Maybe I could re-experience the magic of the first movie.

I got to the mall in time to take care of a return and do a little shopping.  I proceeded to the cineplex, found a good seat and eagerly waited for the movie to start.

I was not expecting what happened next.  The movie did not start at the published time.  It did not start after a few minutes of "coming attractions" or a cartoon.  Instead, I was subjected to 45 minutes of advertising, movie trailers, and snippets of the worst gossipy, adolescent daytime TV imaginable.

In the seat I had paid to sit in I was subjected to GEICO ads.  There was not even a Road Runner cartoon to compensate for being treated this badly.  To complete the experience, the volume was turned up so loud, it was painful.

Even the movie trailers were annoying.  Kung Fu Panda was silly and noisy and Zootopia had the most irritating cartoon characters I have ever seen.  Sitting through those trailers was excruciating.  Is there anyone over 10 who could endure the entire movies?

One more thing made this experience even more incredible.  Looking around, the other people in the theater appeared to be in a state of rapture watching all that crap on the screen.  One group of five women giggled constantly, and loudly, and that continued into the movie.  The audience's conditioning appeared complete.  I was living in a scene from Brave New World.

I had not anticipated the experience of captive indoctrination.  Why are theater customers putting up with this?  By the time the movie started, I was so riled, I was in no state of mind to watch it.  I didn't enjoy it at all.  There would be no magic with THIS Star Wars.  I was not in Cedar Rapids or Greenbow, Alabama anymore.

There's more.  I had arranged for the shuttle to pick me up based on the published movie times.  Even that turned out to be a fraud.  Because the movie didn't start as scheduled, I had to leave before it was over to catch my shuttle.  I didn't care.  I was happy to be leaving.  At the point I left, Han Solo, Poe Dameron and company were preparing to attack the death star 2.0.  I think I know how it ends.

As an aside, did you know actors Oscar Isaac (Poe Dameron) and Adam Driver (Kylo Ren) also appeared together in the movie Inside Llewen Davis?

Now I will wait for Star Wars: Episode VII to come to cable or my streaming service.  Then I can really enjoy it, with the company I choose, without advertising, on my big-screen HDTV, with the soundbar, in my comfortable chair.  After this awful experience, if I ever again venture into a movie theater, and that's doubtful, at least I will know what to expect.

"...most men and women will grow up to love their servitude and will never dream of revolution."