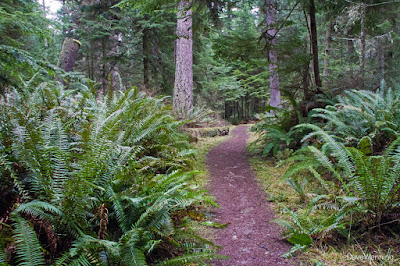 What is it about a trail that is so enticing?  I find myself compelled to follow its course to see where it goes.  What's at the end?  What will I discover along the way?  I was delighted when Deception Pass State Park announced that this year's First Day Hike would be at Hoypus Point at the north end of Whidbey Island.  I had hiked all of the Deception Pass trails now except the ones in this section of the park.  For me, Hoypus was terra incognita.  It was about time for me to get to know this part. 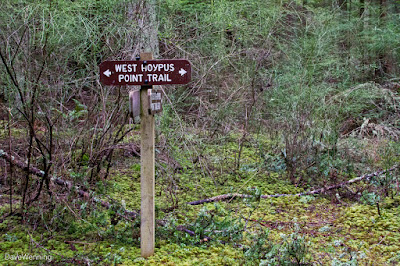 There are sixteen named trails in the Hoypus Point network.  So far, I have explored the East and West Hoypus trails, the CCC Crossing and part of the Fireside Trail.  One of the trail names on the map (.pdf) that caught my eye was Fern Gully.  That's the one I wanted to explore next.  From Cornet Bay Road, this would be my route:

This figure eight loop would cover about 5 miles/8 km with an elevation gain of approximately 380 feet, 116 meters.  The uphill trekking was not difficult.  There was a fairly steep downhill section at the west end of the Fireside Trail.  For some reason, these are more difficult for me than the uphills. 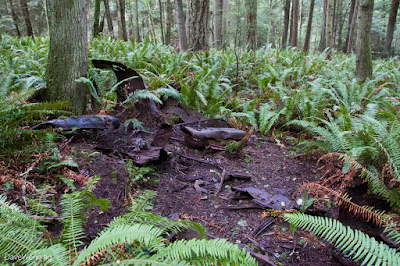 Just off the West Hoypus Trail, I had not noticed this rusting automobile on my first visit.  There are exterior body parts and one seat cushion spring as best I can tell.  No engine block, transmission, axles or other heavy parts were apparent.  It appeared to be a 1930's or 1940's fastback style car.  How it got here is a mystery.  There are no obvious roads to the site.  It was as if it had dropped out of the sky.  Apparently, there is something about the soil around the rusted parts that prevents ferns and other forest plants from growing.  If anyone knows the story behind this relic, I would like to hear from you. 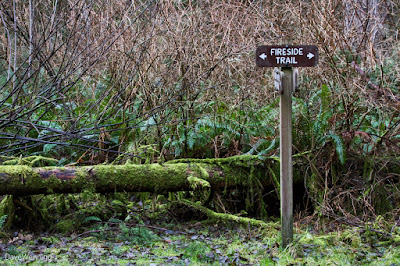 I went left here my first time on the Fireside Trail.  This time I would go right  Perhaps this section would reveal why it's called "Fireside." 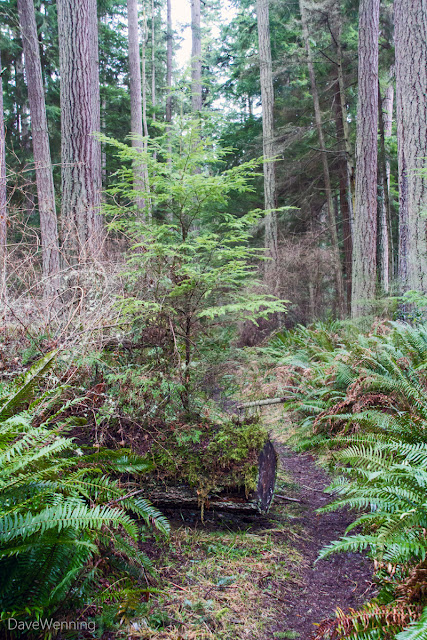 One point of interest was this classic nurse log.  It was probably brought down by the wind many years ago.  The sapling is a Western Hemlock (Tsuga heterophylla), a tree that relies on these rotting logs for germination.  It is possible to find perfectly straight rows of hemlocks, revealing the trace of a nurse log which has disappeared.

The canopy is open here letting in lots of sunlight.  In a hundred years or so, this sapling will take its place among the giants.  It is the destiny of all big trees to eventually fall and become nurse logs for new generations.  It is a story of life after death.  I have thought that Nurse Logs might be a good name for a blog about Pacific Northwest forests. 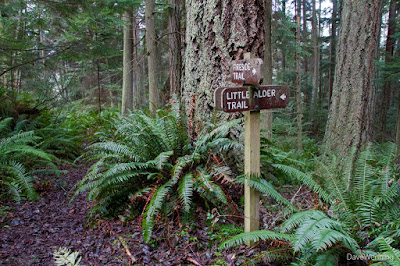 The Fireside Trail ends with a left turn onto the Little Alder Trail.  Proceeding straight ahead would lead to private property outside of the park boundary. 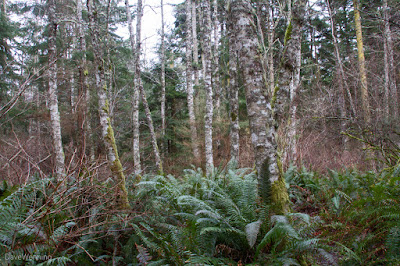 I still don't know why it's called the Fireside Trail.  It was obvious, however, why this trail was called "Little Alder."  Its 0.3 mile (0.5 km) length crosses through a large grove of Red Alders (Alnus rubra) where the canopy opens to the winter sky.  In forest succession, the Red Alder is considered a pioneer species.  After a coniferous forest is burned or clear-cut, the deciduous Red Alder is one of the first trees to spring up.  It grows fast and its life is relatively short.  In the meantime, its annual leaf drop helps to nourish the soil and prepare it for the next phase of forest succession.

It occurred to me that the trail name "Fireside" might reveal a past forest fire that burned where the alders are now growing.  That's just a guess, of course, but it's a story that would fit the trail names. 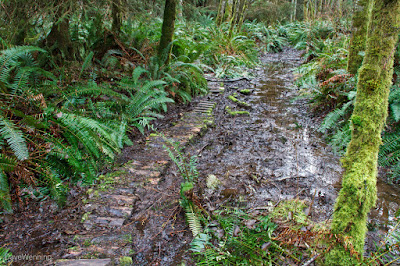 Oh good, lots of mud to slog through.  At least someone thoughtfully provided a makeshift boardwalk to bypass the worst of it.  Whoever did this, thank you.  The Red Alder can tolerate these wetland conditions.  From what I have experienced so far, I suggest waterproof boots for hiking all of the Hoypus trails.  Wet places like this seem to spring up everywhere I have been. 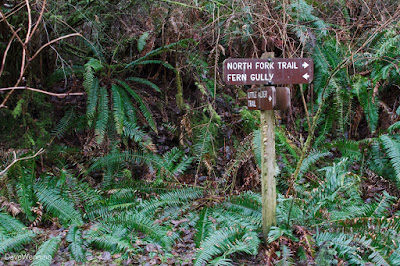 Another trail junction and here I find Fern Gully, the object of my quest.  I'll reserve the North Fork Trail for a future hike. 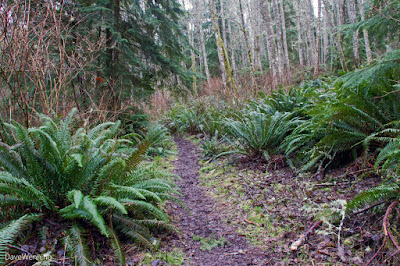 This trail proceeds out of the alder grove and back into coniferous forest.  It immediately becomes obvious why this was called Fern Gully. 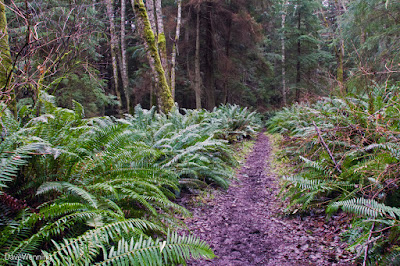 The arching fronds of Western Sword Ferns (Polystichum munitum) were up to my shoulders here and many were growing over my head, perhaps 7 feet or 2 meters tall.


I reached a point where these giant ferns covered the forest floor as far as I could see in every direction.  This is one of the commonest understory plants of the Pacific Northwest, but I have never seen them growing as magnificently as this.  Coming here was not a wasted effort.  It was very still and quiet.  I felt a serenity in this place and a pleasing sense of fulfillment.  I wish I had the skill to portray that in the photos. 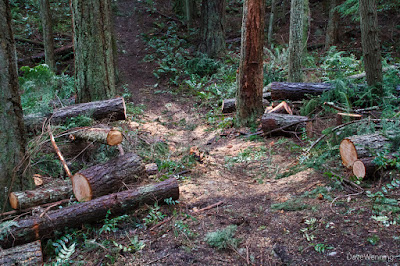 This spot in Fern Gully has recently been cleared of windfall.  I suspect the guys from SWITMO did this work.  They are a great organization, much appreciated by us hikers.  This is a fairly remote section of the park, so I was surprised they had gotten here so soon after our winter windstorms.  SWITMO takes care of trails in Skagit, Whatcom and Island Counties. 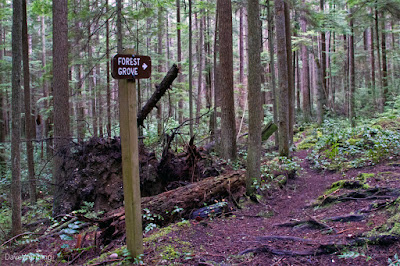 Another junction revealed the Forest Grove trail.  Turn around 180° to find the Hemlock Hideaway trailhead.  That's another enticing name for a future hike.  For now, I will continue on into Forest Grove. 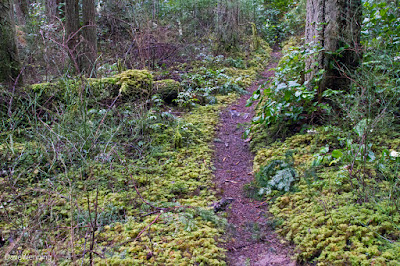 In Forest Grove, I found the shoulders of the trail carpeted with Step Moss (Hylocomium splendens).  Looking off into the woods reveals this to be the dominant groundcover here, instead of Western Sword Ferns.  The yellowish tones add a little brightness to the otherwise dark palette of the forest.  Globally, Step Moss grows widely throughout the northern hemisphere.  There is concern this moss may be adversely affected by climate warming. 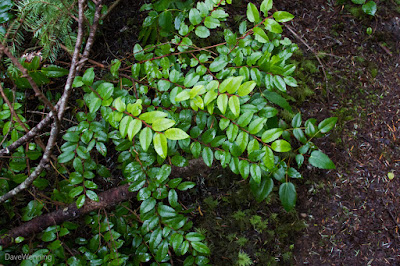 I found Evergreen Huckleberry (Vaccinium ovatum) growing here.  This is another of our Heath family plants (Ericaceae) related to rhododendrons, Salal and Madrona.  Mycorrhizal fungi around the roots help them to tolerate our acidic, infertile soils. 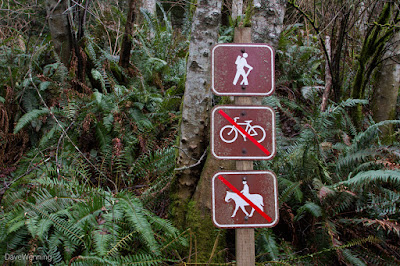 There was something else I discovered on the Forest Grove trail.  I had to watch where I put my feet.  It was covered from one end to the other with horse $hit.  Apparently some horse people don't understand, don't read or don't care about signs and rules.  I am not the only one who has noticed this. 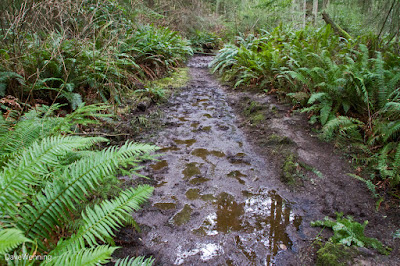 Back on the east end of the Fireside Trail, I had forgotten about this. 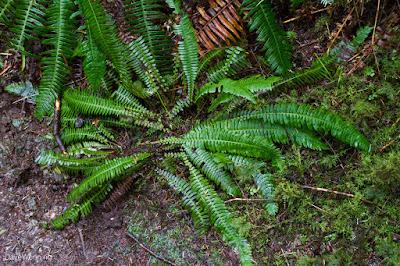 This is another of our native ferns, Deer Fern (Blechnum spicant).  I have noticed that it will be found where conditions are wetter.  Although a bit bedraggled in its winter condition, it becomes a beautiful little fern in the spring.  The fronds you see do not produce spores.  Instead, they will grow taller specialty fronds which bear their reproductive cells. 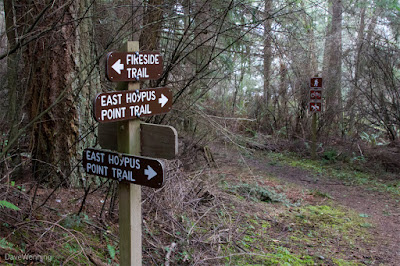 After that long downhill stretch I mentioned, the Fireside Trail meets up with the East Hoypus Point Trail.  Hiking will be a piece of cake from here. 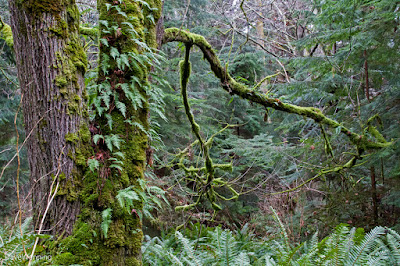 This time, what I noticed along the East Hoypus Trail were the many Bigleaf Maples (Acer macrophyllum) growing here.  They are often found growing with Douglas Firs in disturbed places.  I mentioned in a previous post the many huge firs that had blown down along this stretch.  This would produce the conditions ideal for Bigleaf Maples.  Given time, these trees can grow very large.

You might notice there is something else special about these trees.  They are not just a single organism.  With adequate rainfall, there will be an entire ecosystem of epiphytic plants on the trunks and branches.  Typically, Mosses and Licorice Ferns (Polypodium glycyrrhiza), along with the maple, complete a triad.  Other plants and lichens can also be found.  In time, soil will form under the thick moss providing habitat for insects, other arthropods and earthworms.  Now you have a feeding station for birds and small mammals.  The droppings of the animals add nutrients to the mix.  Like I said, it's an ecosystem, and a very beautiful one at that. 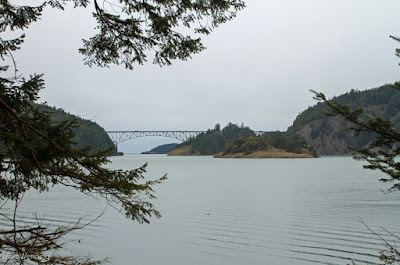 At the end of the East Hoypus Point Trail, I find myself back on Cornet Bay Road.  Heading back to my car, I took this shot of the Deception Pass Bridge under an overcast sky.

Getting to Hoypus Point:  From Interstate 5, take the Burlington/Anacortes exit 230 and head west towards Anacortes on Highway 20.  Cross the bridge onto Fidalgo Island.  Watch for the Deception Pass/Port Townsend Ferry intersection and turn left there.  Continue over the Deception Pass Bridge onto Whidbey Island.  Go 1 miles/1.6 km and turn left on Cornet Bay Road at the stoplight.  Follow the road to its end at the State Park marine facilities and parking area.  The trailheads are beyond the gate you will see to the north.