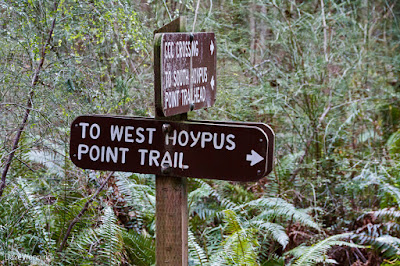 The 2016 First Day Hike at Deception Pass State Park would introduce me to Hoypus Point.  This is a section of the park I had never explored.  On December 30th, I hiked the CCC Crossing Trail in the Hoypus Natural Forest Area,  My birthday was this past weekend.  To celebrate, I decided to check out another Hoypus trail called The Fireside Trail. 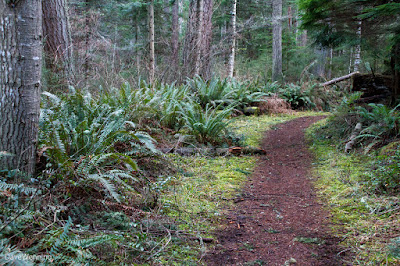 Hoypus Point and Hoypus Hill form the largest section of the park.  This may also be the least developed section.  Several trails form a network.  On the map, I count 16 in all with interesting names like Slug Slough, Fern Gully and Big Marsh Trail.  For my birthday, Fireside Trail sounded the most inviting.  I wanted to see why it had been given that name.  Since I also had no idea what I was getting myself into, this hike seemed a reasonably sized adventure.


At what appeared to be the summit of the West Hoypus Trail, I encountered some wetlands.  Spotting those grasses up ahead was a giveaway.  This place is probably damp year around.  There was also a lot of frost here, but the mud and puddles were not frozen.  It was possible to sidestep the puddles and avoid walking in the water. 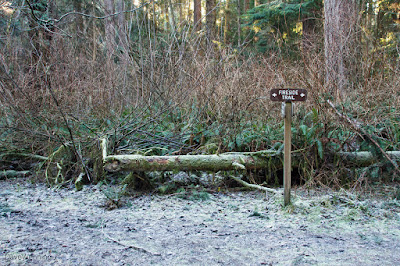 I reached the Fireside Trail under an opening in the canopy and headed left.  I noticed that frost would appear in the more open areas.  Where the canopy was closed, the trail would be frost free. 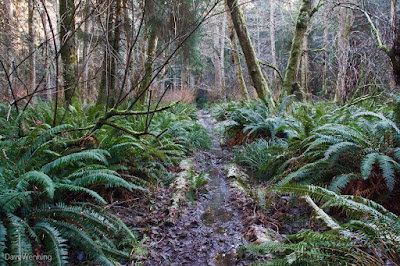 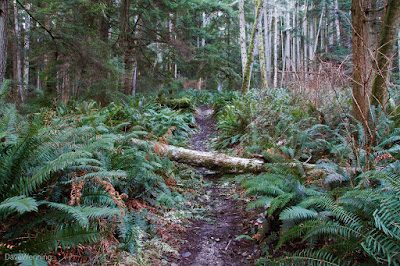 There were more wet areas on the Fireside Trail and this time I could not avoid walking in water and soft mud.

This raises the subject of waterproof hiking boots.  If you read the earlier post, you know I have been shopping for them.  I ended up selecting the Keen Targhee II's.  They had generally good reviews, especially regarding comfort.  They were reasonably priced and several review sites rated them a best buy.  The most consistent criticism was durability.  But since I am now 70, how hard on them can I be?  Time will tell.

I wore the new boots on this hike.  They were comfortable after I found a lacing technique that kept them from rubbing my ankles.  Best of all, after having to slog through mud and puddles, I came home with warm, dry feet.  That was the goal.  My sneakers would have been overtopped by the puddles, and I would have been miserable for the rest of the hike. 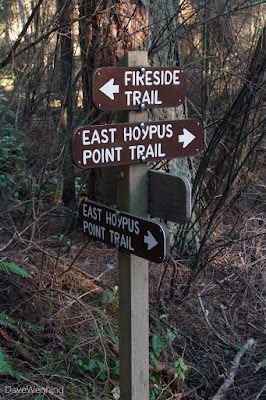 I finally got past the wetlands and found the rest of the Fireside Trail mostly dry.  I encountered a long, downhill slope where I lost much of the elevation I had gained.  Then I found the junction to the East Hoypus Trail.  This would take me back to Cornet Bay Road. 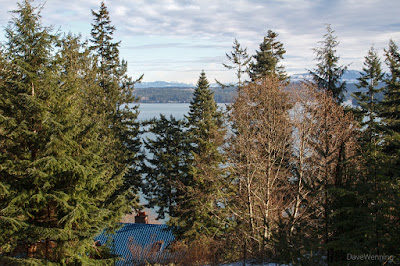 The East Hoypus Point Trail skirts a strip of private property and houses along Angler's Haven Drive.  From here, I caught glimpses of the North Cascades across Skagit Bay.  I also noticed that overcast was starting to form.  I had clear, blue skies at the beginning of the hike.


Several huge, old-growth trees had blown down along this stretch.  Some were fresh from this season but many were ancient.  Apparently, the east side of Hoypus is more susceptible to the fall and winter winds that can rage up Skagit Bay.

Losing these giants is not as disastrous as you may think.  When they fall, there is an opening in the canopy that lets in light.  This nurtures new growth of all sorts.  The trunk will decay, returning nutrients to the earth.  It will also become a nursery for new plants and trees.  This cycle has been repeating for millennia in our forests.  It is a story of life after death. 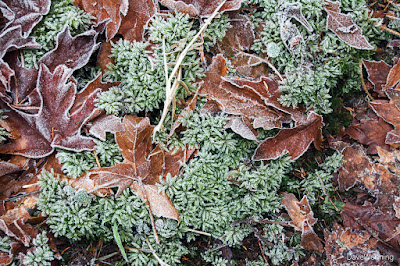 I found a type of moss I had never seen decorated with frost.  On closer inspection, it might be a liverwort.  They are just as difficult to ID as mosses.  As always, if you know what this is, please post it in the comments.  The diversity of plant life in these natural forests is uncountable. 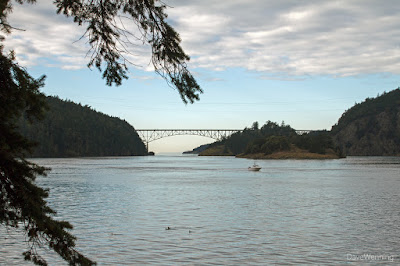 Back on Cornet Bay Road, I never pass up an opportunity to photograph the Deception Pass Bridge, in good lighting or bad.

This is the middle of winter here.  When I started the hike, it was 32° F (0° C) and when I finished, it was still 32°.  In the shady places, I was enthralled by the beauty of the foliage decorated with frost. 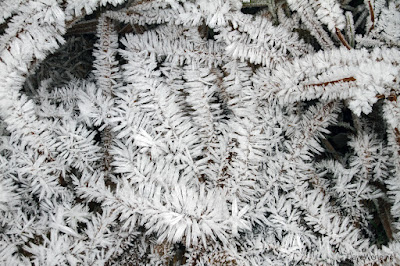 Next to Cornet Bay Road, I found this amazing example of hoar frost.  At least, I believe that is what this is.  Those are not fir branches on the ground.  Those are twigs and grasses covered with long needles of ice.  These form overnight under sub-freezing temperatures, clear skies and radiative cooling.

I had a terrific time exploring new territory on my birthday.  According to the map, the hike was 3.5 miles (5.6 km) in length.  My wristband tracker indicated it was 3.6 miles.  The difference would be the distance from my car to the trailhead.  I was pleased to see how accurate the wristband was.  It recorded the hike automatically and documented my heart rate at 110 bpm, right on target.  From Cornet Bay Road at sea level, the elevation gain was about 380 feet.  The wristband gave me credit for 47 flights of stairs.  It took me 2 hours and 45 minutes, with stopping to look at things and take pictures.  Data is cool.

The mystery remains why it is called the Fireside Trail.  I only hiked the eastern two-thirds of it.  Perhaps the answer can be found in the western part.  I'll have to check that out another time.