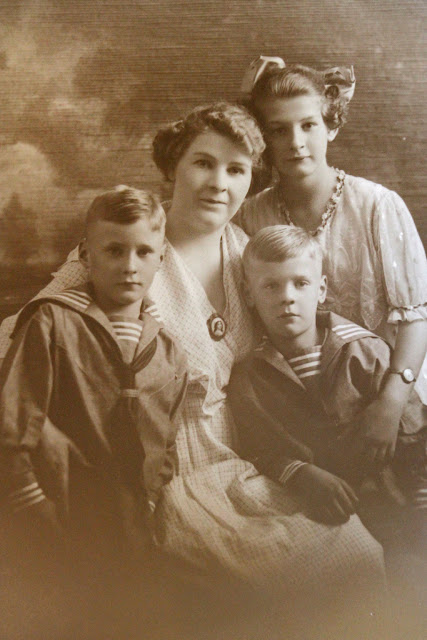 History can be either great or small, important and earth shaking or insignificant.  I have regarded my own personal history to be unremarkable.  I had some boxes in my basement that my grandmother had packed up maybe thirty-five or forty years ago.  I had never taken the time to look through them until a few weeks ago.  I was amazed to find some rather wonderful family photos.  I have always enjoyed looking at vintage photos so I was tickled to death to find these.  I took them downtown to be framed and just got them back.  Keep in mind, these are photos of photos, so the quality presented here is a bit rough.

Above is my paternal grandmother Louise Wenning.  Her maiden name was Geiger.  The young girl is my Aunt Irene Wenning.  The two boys are twins, my Uncle Herman on the left and my father Henry Wenning on the right.  He was born in 1915, so this photo must have been taken around 1920.  If you want to know what I looked like at about age five, there he is on the right.  I must say, I think this is one of the most beautiful family portraits I have ever seen.  What a delightful discovery.

I don't know why my grandfather Hermann Heinrich Wenning is not in the photo.  I found something at ancestry.com that indicates he died in 1920.  If that's the case, he would only have been about 35 years old.  The two boys were each given one of his names.  I have become aware that those two names, Hermann and Heinrich (Herman and Henry), seem to be important in the family.  I never knew either of my paternal grandparents.

They lived in Cromwell near Gig Harbor, Washington.  They had fruit orchards there, but I don't know if this was a business or a hobby.  According to family lore, he developed a variety of plum which he called Sweet Louise. 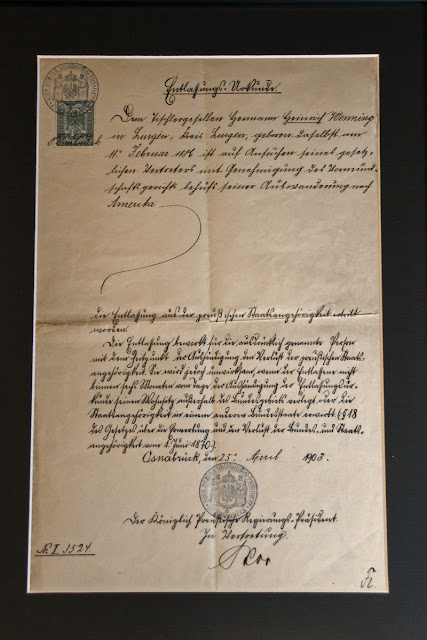 My paternal grandfather emigrated from Germany in 1903.  His home town was Lingen-Ems, Niedersachsen, Lower Saxony.  This document releases him as a subject of the King of Prussia allowing him to leave Germany and come to the United States.


Right-click the photos to view them full size.  I can read German and also speak a little, but I cannot read this old script.  What I can piece together from this is that my grandfather was born February 11, 1886 in Lingen.  The document was executed in Osnabrück on April 25th, 1903.  That's 112 years ago.  He was required to leave the country within a certain period of time, according to the document.

The document gives his name as Hermann Heinrich Wenning and the Heinrich is underlined.  Does that mean he went by the name Heinrich?  The reference at ancestry.com lists his name as Henry H. Wenning, anglicizing and reversing the two names.  There seems to be a mystery to be solved here. 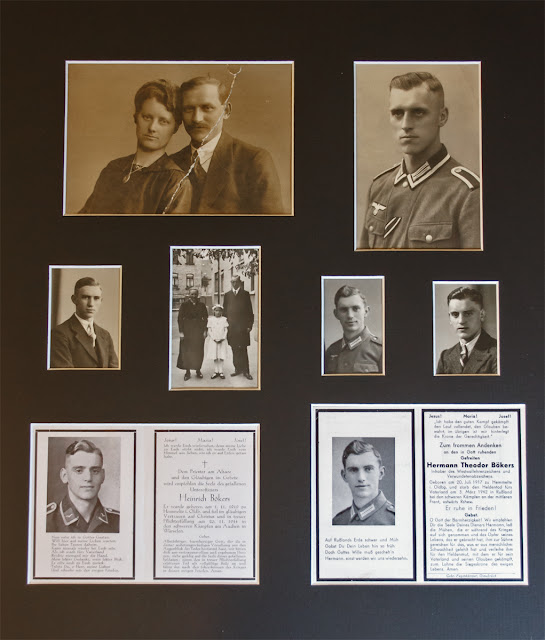 This is where things get more interesting.  My grandfather had a brother Bernhard Wenning who stayed in Germany.  I have letters he wrote to my maternal grandfather during the 1940's and 1950's.  His letterhead reveals his business was freight hauling ("frachtfuhrwerk").  These photographs were included with the letters.  He is shown here with his wife in two photos, the upper left and the second photo in the second row.  The latter includes their daughter on her confirmation day.  My father's German side of the family were all Roman Catholic.  My mother's Swedish-German side were Lutherans.  This might explain my ecumenical disposition. 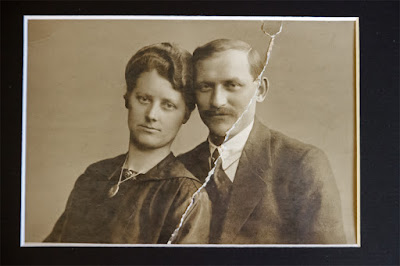 I took some closeups of parts of this group.  This is Bernhard and his wife.  She is not identified by name.  On the back of the photo it says, "Mein frau und ich als Vuloffe (?) vor 28 Februar,"  "My wife and I as [??] before February 28."  (Actually, I think it should be "meine Frau," but I won't quibble.)  She is also not named in the second photo and neither is their daughter.  All of Bernhard's letters were just signed "B. Wenning and family."

Does anyone know what "Vuloffe" means?  I am reading handwriting, so I may have some letters wrong.

UPDATE:  My German friend at work figured it out.  The word is not "Vuloffe," it's "Verlobte," engaged, betrothed or fiancée.  Thus "Mein frau und ich als Verlobte vor 28 Februar," "my wife as fiancée and I before February 28." 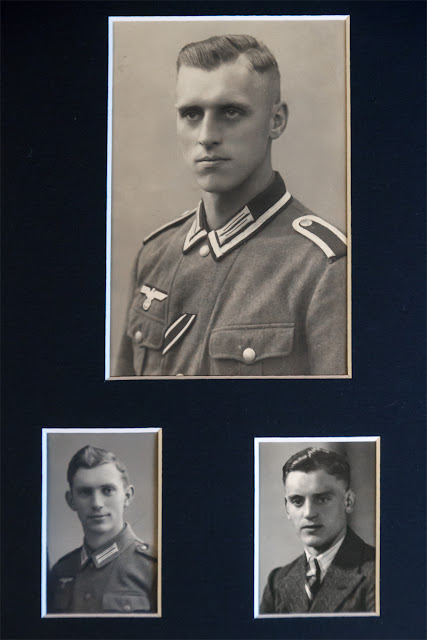 In this group, the back of the top photo says in German, "Our eldest son Georg 1942."  He would be Georg Wenning, my first cousin, once removed, right?  Disconcertingly, the photo makes him look like a Nazi poster boy.  Imagine finding this in your family tree.

The bottom photos are identified Hermann Bökers (left) and Heinrich Bökers (right).  There are those names again, Hermann and Heinrich.  I don't know who these guys are or how they are related to Bernhard Wenning.  My best guess is they were nephews, but I am not certain of that.

When I found the photos, I was taken aback by the uniforms.  Of course, this is Germany in the 1940's, so it should not be surprising that young men would be serving in the military.  These are Wehrmacht uniforms, not SS, so at least I can imagine they were drafted into military service.


The bottom images in the group are both poignant and politically correct for the time.  These are funeral memorial pamphlets.  They reveal that Heinrich Bökers (left) was born November 1, 1919 and "fell believing in Christ and in faithful fulfillment of duty" November 20, 1944 "in heavy fighting around Aachen in Würselen."

Hermann Theodor Bökers (right) was born July 20, 1917 and died "a heroic death for the fatherland" March 3, 1942 "in heavy fighting on the central Russian front east of Rzhev."

Regarding Georg Wenning, I have no information about what became of him.

It is interesting that in all of Bernhard's letters, there is little mention of the war and nothing of German politics of the time.  The only things he talks about are the shortages of goods like sugar, coffee and medicines.  I have wondered how freely and openly correspondence moved between Germany and the U.S. during that period. 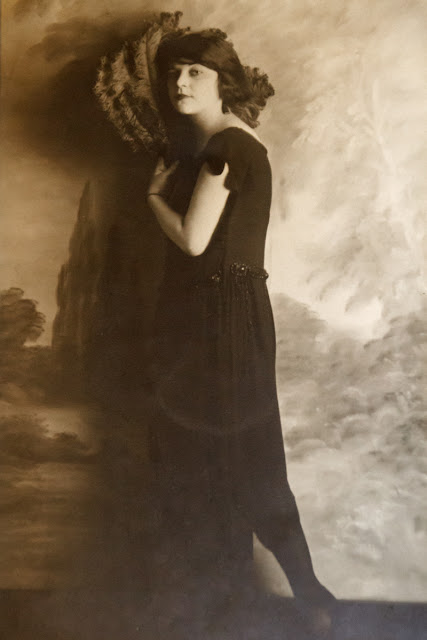 I have no idea who this is, but the photo was included among the others.  Is it an earlier photo of my grandmother Louise?  From the look of it, it could easily be a hundred years old.  I decided it had to be framed and kept in the group. 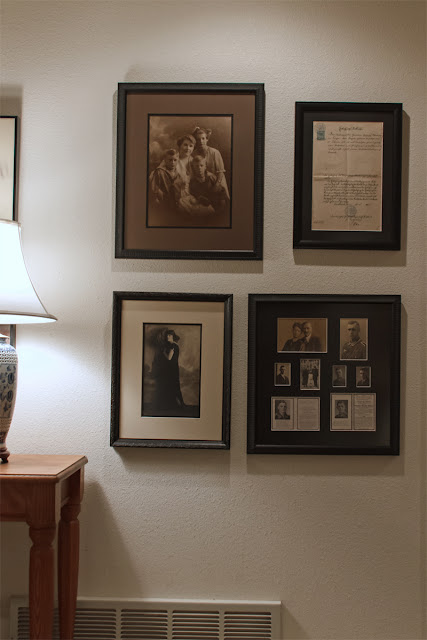 Finally, here is the collection hung in my entry hall.  What fun it has been discovering these photos and the emigration document, getting them framed and finding this spot to display them.  Even if you are nobody, your family history can turn out to have surprising features.

This has made me curious, and I may look into one of those services that researches ancestors and lineage.  I might also try to find a way to email someone in the town of Lingen-Ems, Germany to see if there are any living descendants of Bernhard Wenning.

Naturally, if anyone reading this post knows about these people, I would enjoy hearing from you.