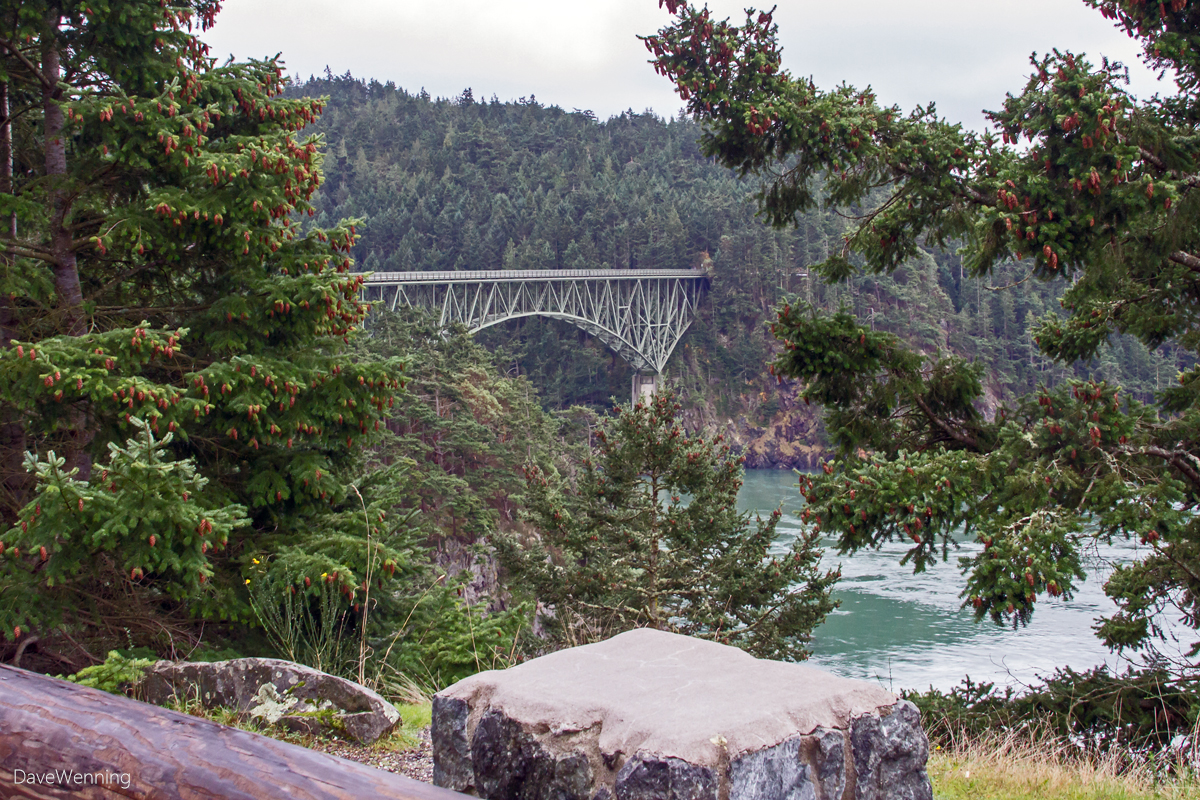 With a health care occupation, working holidays is standard.  Since I usually work Christmas, I get Thanksgiving Day off.  For the past few years, I have started the holiday over at Deception Pass to look for photo ops.  This year I found myself looking forward to my Thanksgiving Day visit.  I guess that's how a tradition gets started.

Deception Pass is less than 10 minutes from my home.  I was up early and headed off a little after 8:00 AM.  I stopped at one of the pull-offs along Highway 20 and got this shot of the bridge.  This is the first spot along the road where the Deception Pass Bridge comes into view.  You can click or right-click the photos to view them full size. 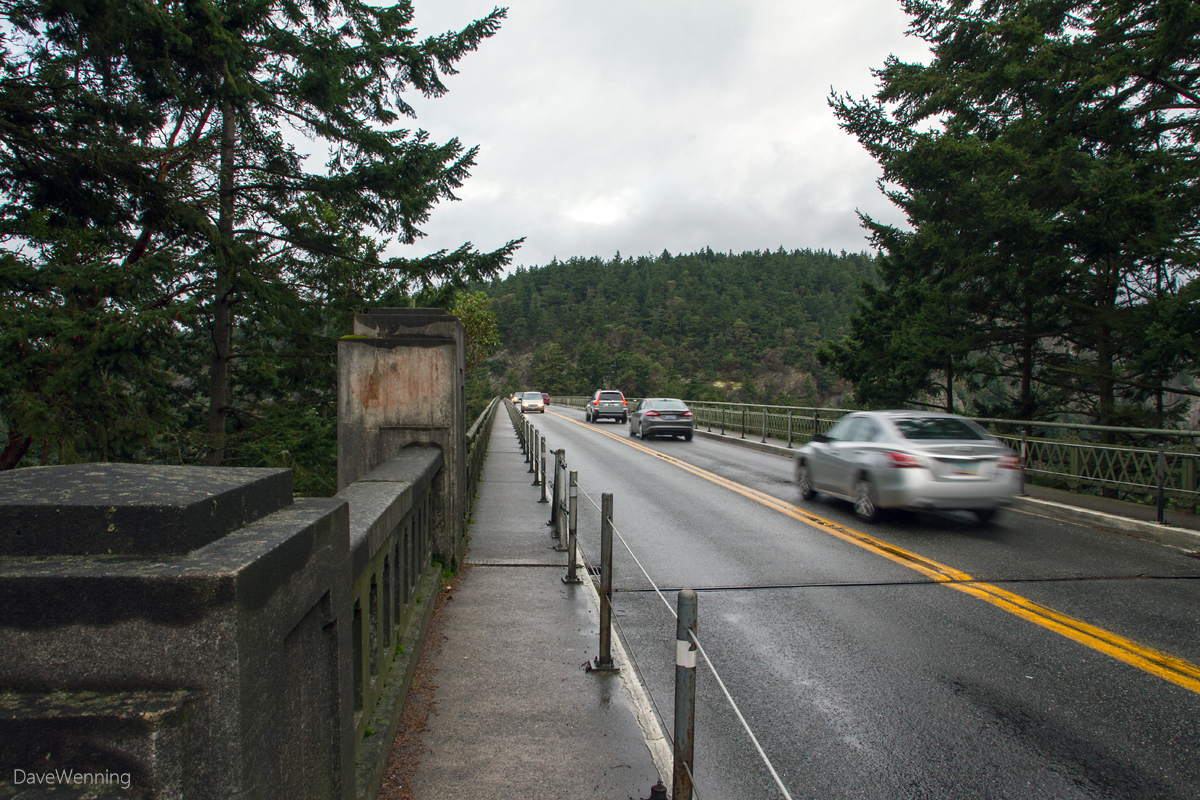 It had been raining all week, and Thanksgiving morning brought us heavy overcast.  But the Olympic Rain Shadow kept us dry for the holiday.

I continued across the bridge and stopped again at the parking area at the south end.  This is a photo of the long span over Deception Pass looking north.  Beyond is Fidalgo Island.  There is a second, shorter span over Canoe Pass on the Fidalgo side.  The two spans meet at Pass Island which sits in the waterway. 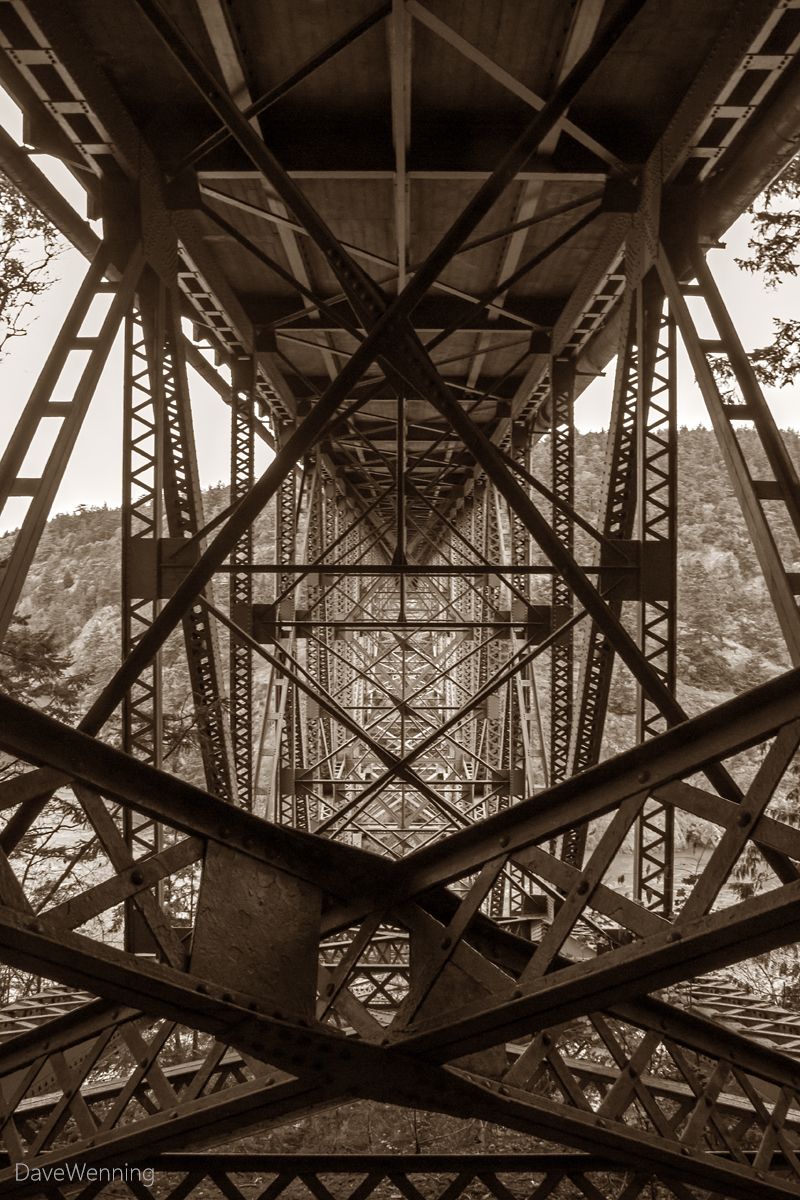 At each end of the long span, stairways take visitors down under the bridge.  They provide a safe way to cross under the roadway since traffic tends to be heavy.  Down here there are overlooks into the pass and short trails along the cliff edge.  This is also a good place to view the steel structure of the bridge.  Engineers call this a cantilever truss.

This is my obligatory photo of the bridge's under-structure.  There are a million of these shots on the net.  I was not happy with the color version of the photo.  It was a run-of-the-mill, muddy mix-mosh of greens.  As an experiment I tried changing it to black and white.  It looked more interesting, but now it seemed very cold.  Then I added the sepia effect and that's the version I liked.  Perhaps this is how a photo of the bridge looked when it opened in 1935. 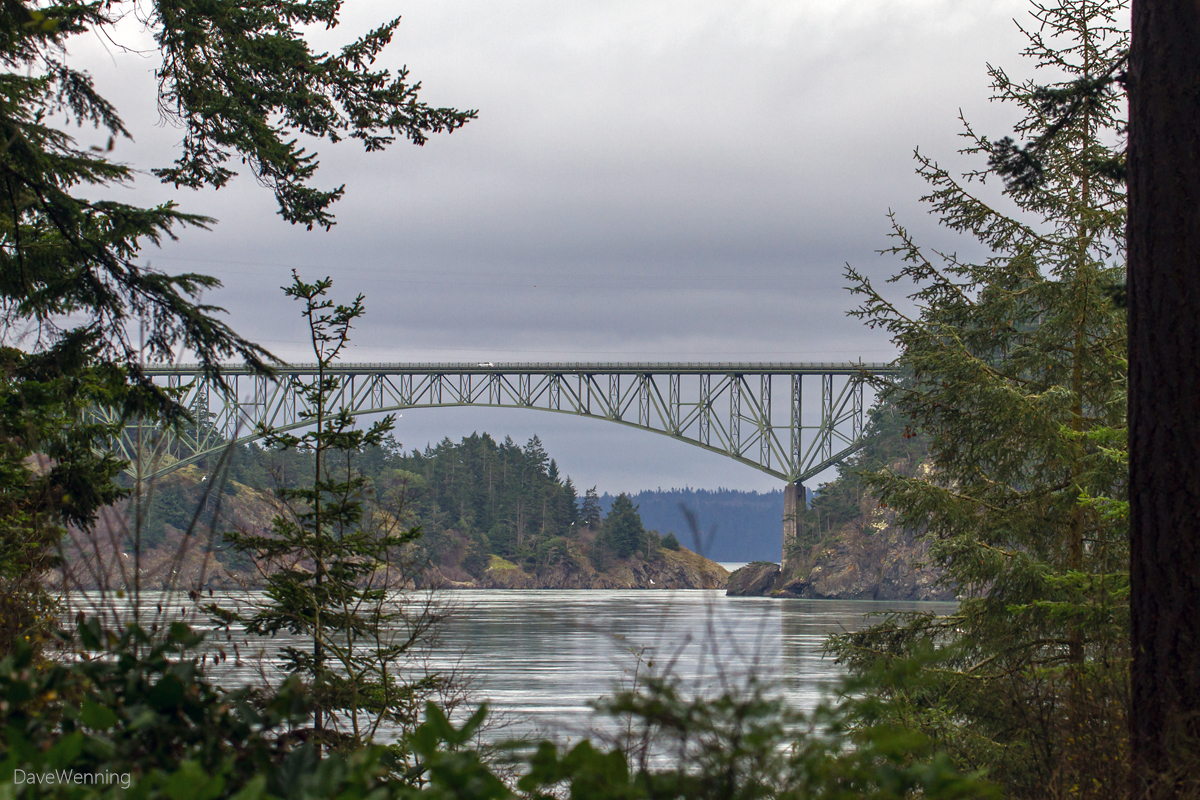 I got back on the road and headed to West Beach in Deception Pass State Park.  From the parking lot, a short trail leads to the Amphitheater at North Beach.  This is another view of the bridge from that trail.  It was still overcast and unusually warm and humid for November. 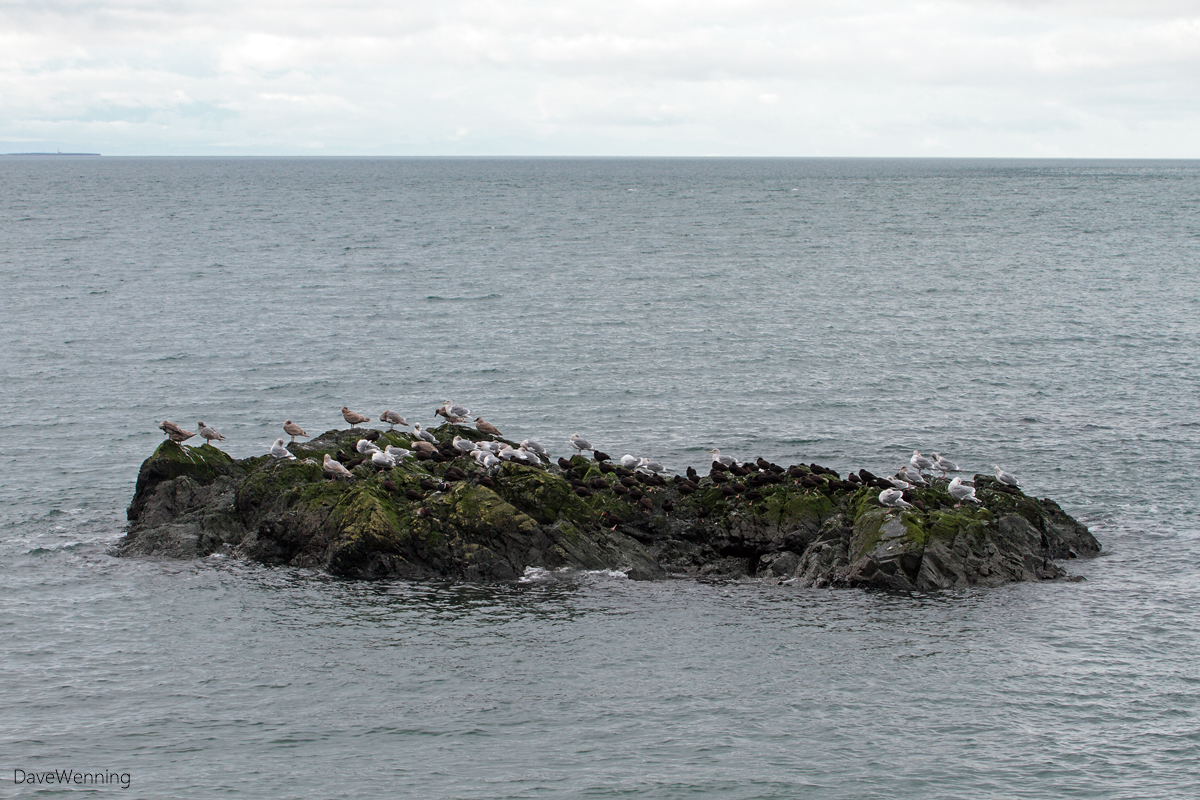 Back at West Beach, one of my favorite wildlife spots is this big rock just offshore in the Strait of Juan de Fuca.  Mid-morning is the best time to check it out.  After a morning of food gathering, this is when the sea birds come to rest, preen and socialize.  For want of a better name, I dubbed it "Fraggle Rock" on Thanksgiving, 2011. Recall from the HBO series, this is a little world apart where something interesting is always happening.  It is a place inhabited by different creatures, unaware of how interconnected and important they are to each other.  On good authority, I have been advised to keep using this name for the rock. 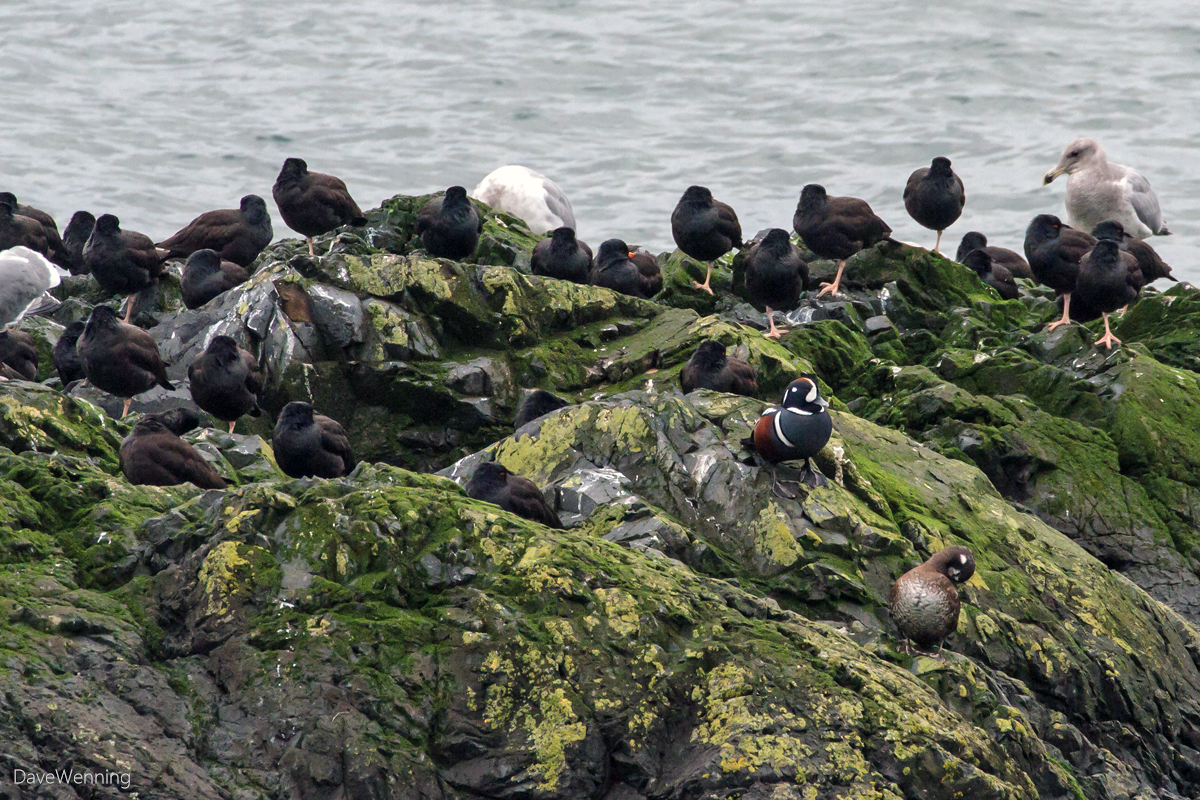 Here is an example of why this rock is a great place for wildlife viewing.  A pair of Harlequin Ducks has joined the gulls and Black Oystercatchers.  This is one of the best spots to find both species according to Seattle Audubon.

I am always struck by how well everyone gets along on the rock.  Even with several species of birds crowded together in a small place, I never see quarreling or territorial disputes. 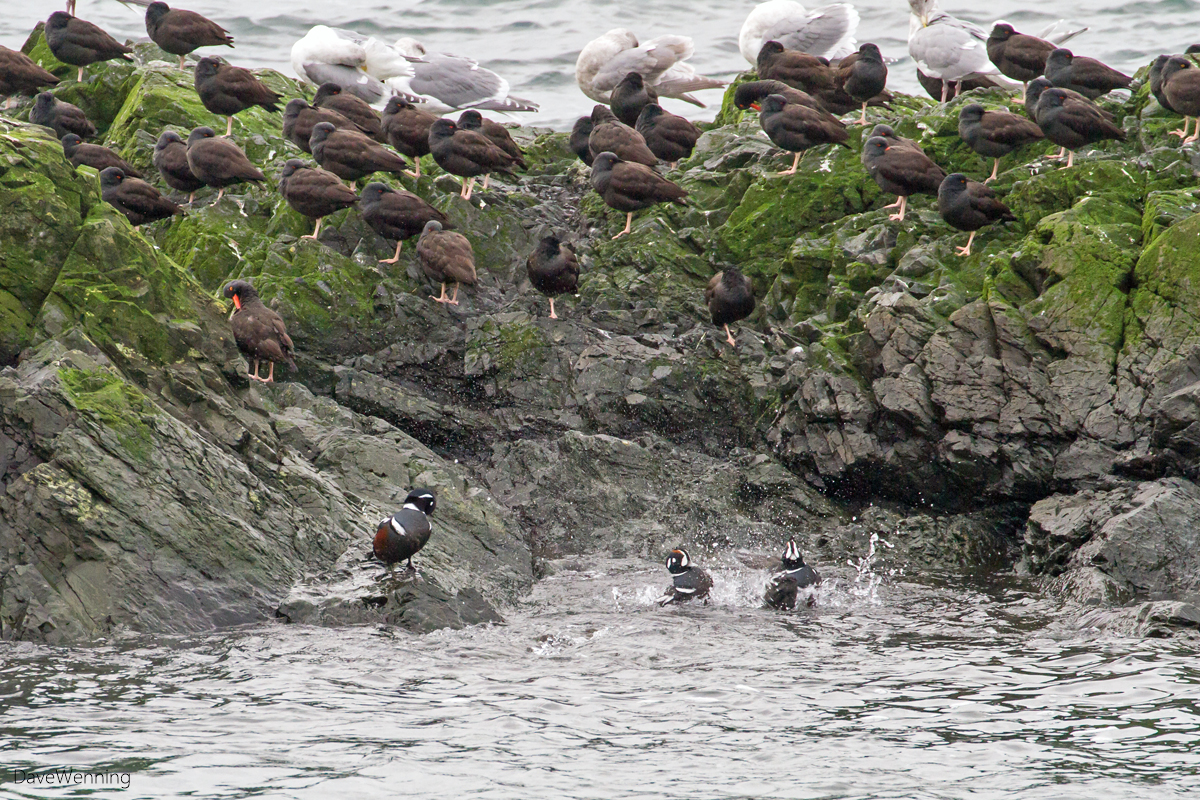 I moved to West Point beyond the north end of the parking lot.  This marks the entrance into Deception Pass from the Strait of Juan de Fuca.  From here, I was able to spot three more Harlequin drakes at the rock.  They were having great fun splashing and bathing in the water.  This is the second time I have observed this behavior.

It was time to check out Cranberry Lake at at the south end of the parking lot.  The sun was starting to come out now.  While points further south were getting a rainy and windy Thanksgiving, the Rain Shadow was giving us a very nice day.

As I approached the lake, I noticed a Great Blue Heron fly in and land out of view behind the trees.  I moved to the shoreline and spotted it across the narrow end of the lake.  It also spotted me and came alert (upper left).  I could tell it was getting ready to launch (upper right).

In the last two photos, I caught the bird in flight.  I am not very good at these panning shots, but the slow flight of such a big bird helped a little..  After I got home and started looking at the photos, I noticed three American Wigeons following the heron's course (lower right). 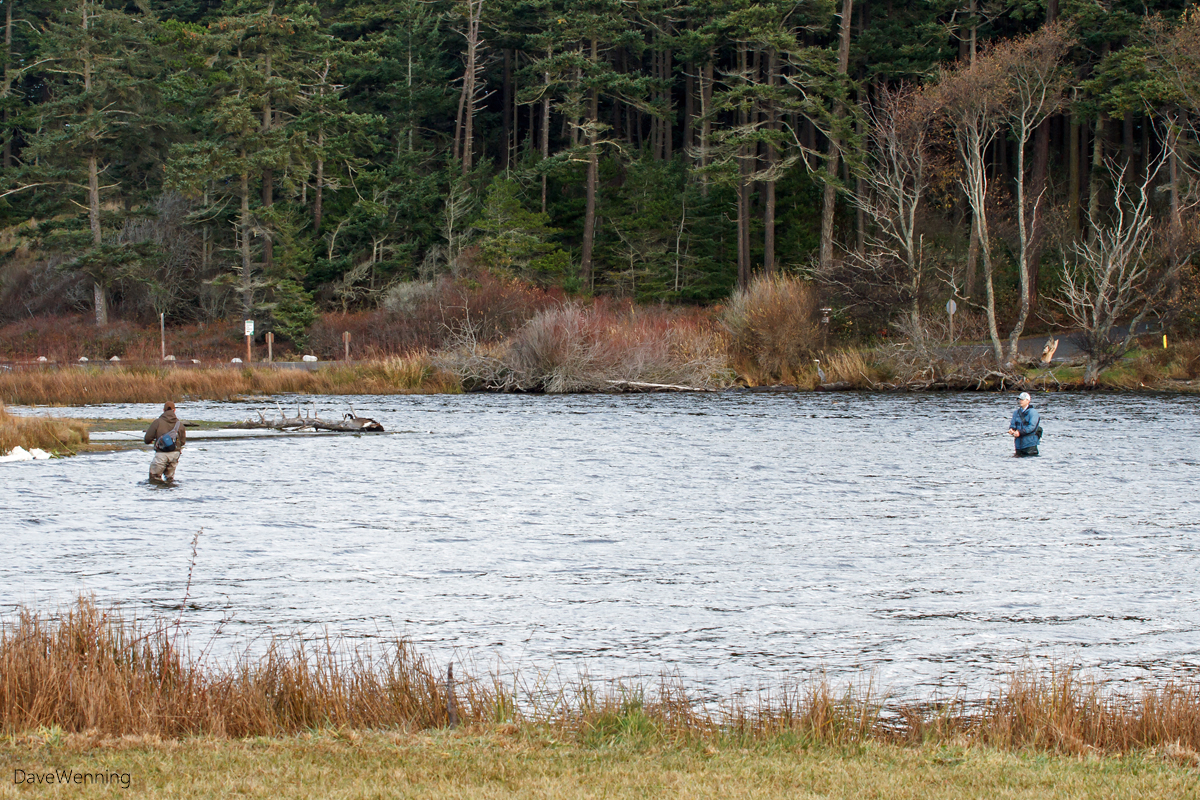 For a holiday, there were not many people in this section of the park.  There were no tourists at all.  We were all hard core "Deceptionistas."  We numbered less than a dozen, all here to do something specific.  We were birders, photographers, hikers, beachcombers and fishermen enjoying a holiday in the park.  In the photo, can you spot the Canada Goose in the company of the fishermen?  There is also another heron in the photo keeping a distance. 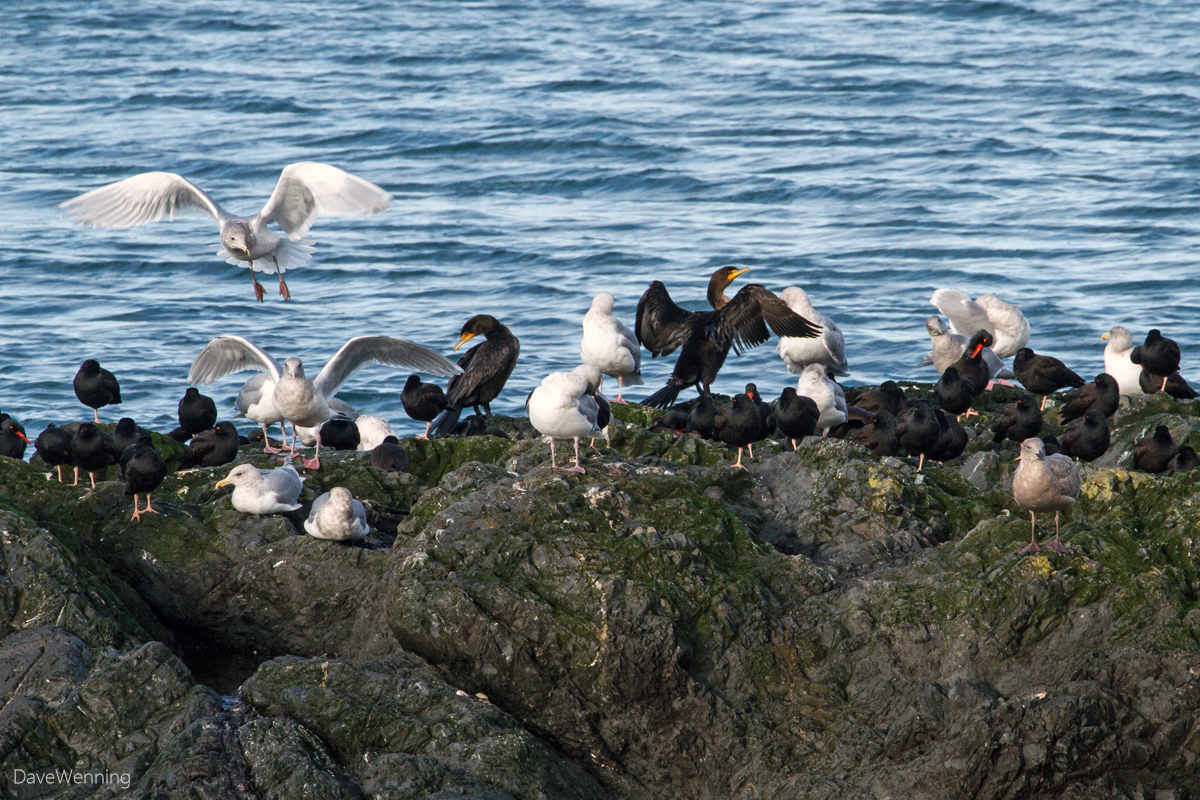 Before leaving, I looped back up to Fraggle Rock for one last look.  I'm glad I did.  A pair of Double-crested Cormorants had joined the gathering.  From a distance, they are identified by those orange cheeks.  One had assumed the "angel pose" used for drying feathers after diving.  It is said that captive birds will do this after feeding even if they are not wet. 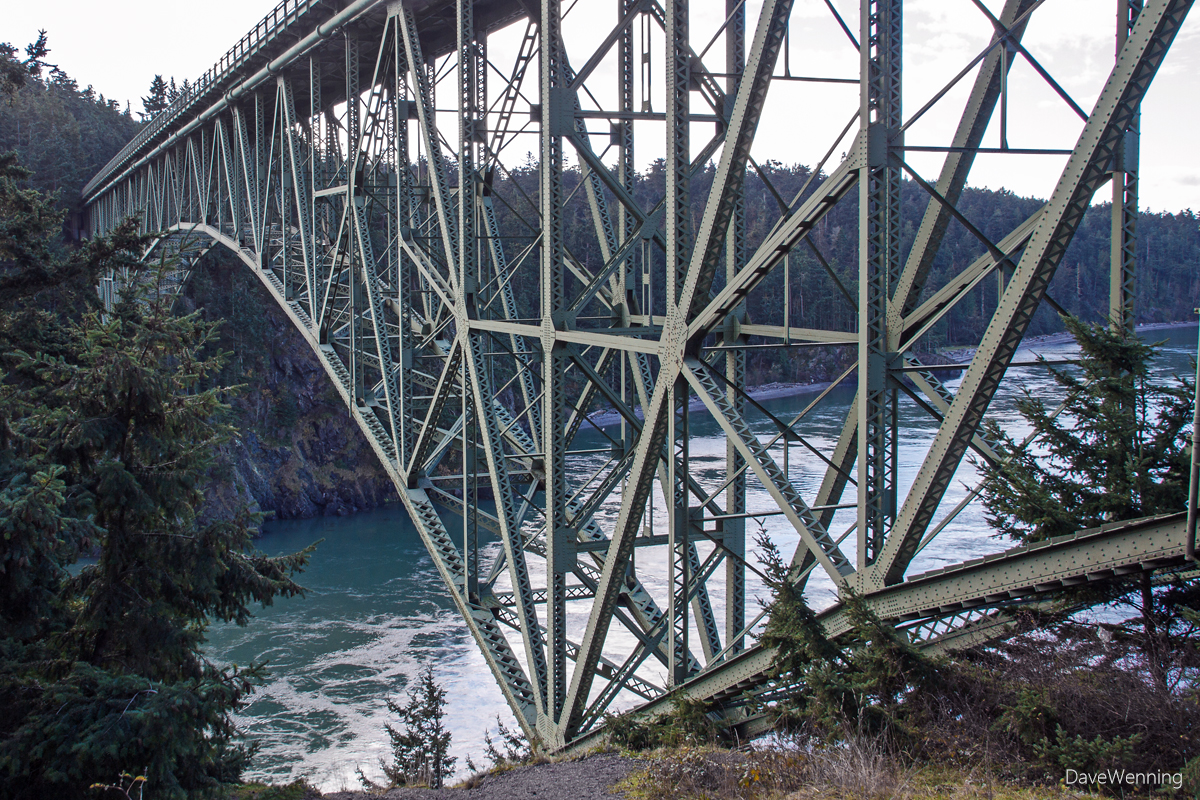 Now heading southbound home, I stopped again at the pull-off on Pass Island between the bridge spans.  This is a view of Deception Pass and North Beach looking through the bridge's structure. 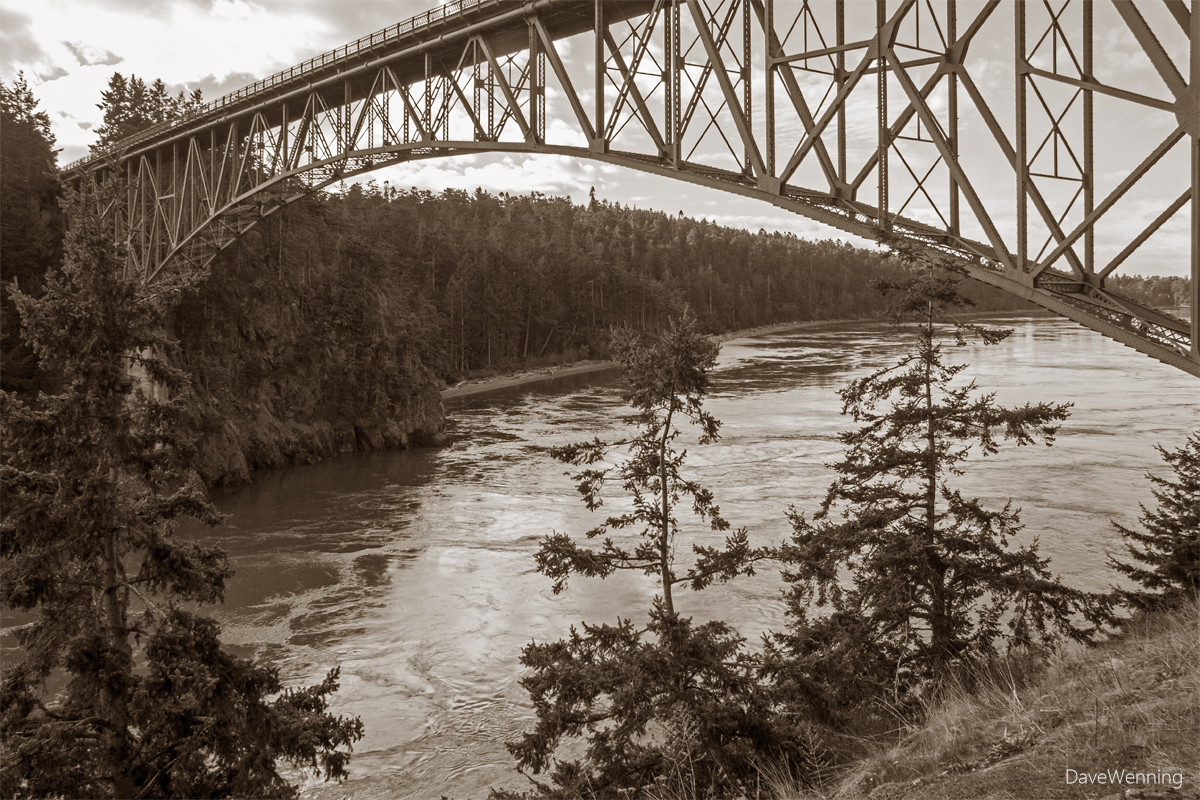 Finally, here is a last shot of the bridge from Pass Island with that sepia effect added.  Again, we can imagine a photo of the pass taken when the bridge opened in 1935.  It occurs to me the bridge will be 80 years old next July.  It is listed on the National Register of Historic Places.

Between now and next Thanksgiving, I will visit this park at least a dozen times.  Nevertheless, I am already looking forward to coming here on the holiday next year.  After all, it's a tradition.