Apple Polishing 2:  My Fairwell to Android

October 27, 2014
This will be a bit of a rant so consider yourself warned.  Also, I don't wish to start an argument.  These are my own experiences with my own devices.  There are no ulterior motives or conflicts of interest here.  You should make your own decisions based on experience, study and evaluations, as I did.

In the spring of 2010, I purchased a 3rd generation iPod Touch.  It was a nifty little device, especially the apps.  The Sibley, iBird Pro, Tide Graph, mSecure, Terminology PH and iFeltThat were some of my favorites.  I could go to the barber or sit in the lobby at Les Schwab and keep up with my Twitter stream or do a little reading with Kindle or Nook.  By 2012, I had started thinking about a larger tablet.  At the time, the iPad seemed a bit much for my needs.  Then Google announced the Android Nexus 7 tablet.  It came with the much-lauded "Jelly Bean" OS.  The announcement was accompanied with rave reviews from tech writers all over the net.  I pre-ordered a Nexus 7 the day after it was announced.

For the most part, I was delighted with the new tablet.  It was great for reading and easy to handle.  My only disappointment were some of the apps.  They weren't bad, but they weren't exceptional either.  For example, there wasn't a single decent tide app available at either the Play Store or Amazon.  Certainly nothing like Tide Graph I enjoyed on the iPod.  I emailed Brainware to see if they had any plans for releasing an Android version.  "No" was their emphatic response.  They explained that "Android people won't pay for apps."  Really?  Does that mean that I am not "Android people?"  But the Play Store did have iBird Pro, Kindle and Nook so all was not lost.  They even had a paid, no-ad version of Accuweather that became my favorite weather app.  But as I got more familiar with the apps, I found many to be mediocre.  With a few, the ads were so intrusive, I deleted them from the tablet.  Nevertheless, I enjoyed the tablet and it became a faithful companion.

Then came Kit-Kat, the Android 4.4 OS update.  Again tech writers were calling it "fast and frictionless," but that was not my experience.  By now a "second generation" Nexus 7 had been released with a new processor.  Mine was a 1st gen.  Apparently the new OS had never been tested on a gen 1 device, but it was pushed out to us anyway.

This was a disaster as evidenced by the howls at the Nexus 7 user forums.  Immediately, the tablet slowed to a crawl.  Every app, every link, every setting began with a pause, followed by a delay.  It was maddening.  In order to keep the apps running, it was necessary to open Settings and clear the cache and force stop the app.  This became a daily routine.  The worst part was the total silence from Google about these problems.

The forums suggested several fixes that seemed risky to me.  Many involved third party hacks from questionable sources.  Google offered nothing.

Where there is injury, insult is bound to follow.  Several of the apps began repetitive updating.  For example, the Android Twitter app started updating every other day or so.  Each time, its performance got worse.  It would thrash and stall when scrolling the feed.  Photos would appear and disappear.  The automatic resetting was the worst of all.  Every time I viewed a photo or followed a link, the stream would reset to the top.  Now it was necessary to scroll, scroll, scroll back to where I left off.  It was the most awful user experience I had ever encountered.  To escape the misery, I ended up using TweetCaster and later Tweedle, but I considered both to be incomplete.

The Chrome browser, Google's pride and joy, also became dysfunctional.  It was so slow and unresponsive, I quit using it altogether.  It would simply ignore me when attempting simple things like closing it.  It would often freeze and crash.  I installed Firefox and that became my default web browser.

The wonderful Accuweather was a beautiful app with easy to interpret colored images.  Then it was updated to screens full of tiny black icons that made it indecipherable.  It was a paid app that I quit using altogether.

As of today, there are nine updates requesting new privileges.  They want to access my contacts and photos and permission to post tweets on my behalf.  Excuse me?  The internet rumor mill is speculating that Google is requiring these permissions to make it easier to track us.  This will never happen.  There is also another Android OS update that I refuse to install, despite the constant pestering.  A web search revealed that it might remove the ability to connect to wifi.  Wow! 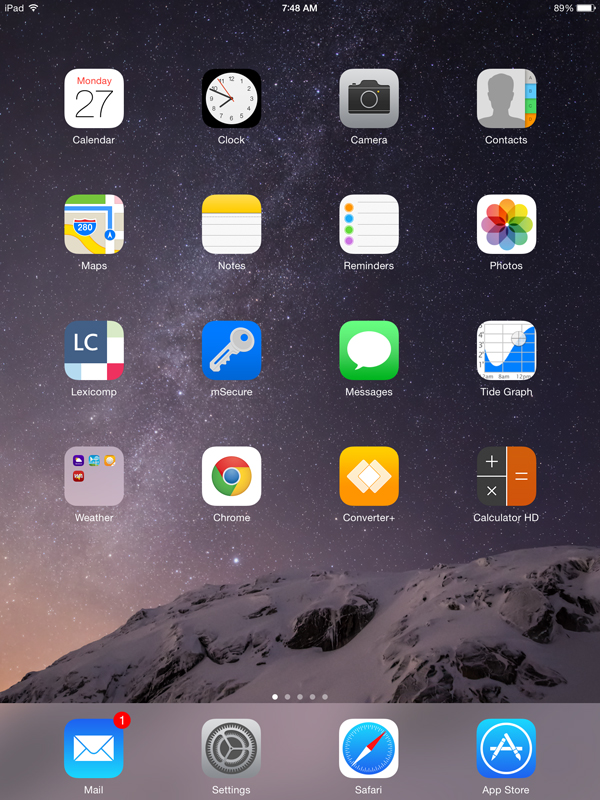 Although my four and half year old iPod Touch maxed out at iOS 5.1.1, it still runs like a clock, "fast and frictionless."  I made a decision this past summer.  I would order a new iPad Mini as soon as the new models were released.  That happened October 16th and I ordered one the next day.

I received it a week later and it's amazing.  The new iOS 8.1 includes the fingerprint touch ID feature.  The home button also reads your fingerprint and it works beautifully.  Even if the finger is cockeyed, it works.  A four digit pin number is also required at power-up and is the alternate access ID.

The biggest surprise was the ability to sync all of my iPod Touch apps to the new iPad.  Even the paid apps, including the pricey Sibley Birds and iBird Pro came across.  Not having to re-purchase them was a big relief.  They still also run on the iPod.  And of course, I have my good old Tide Graph again.

Both Chrome and the Twitter app run fast and smoothly on the iPad as they should.  I don't know how they became so awful on the Nexus 7.  The Twitter stream doesn't keep resetting to the top.  So far, I am happy with all of the apps.  I also like the Safari browser that comes with the iPad.  It has a zen quality that I appreciate.

The new iPad Mini includes a camera which the Nexus 7 lacked.  I haven't played with it yet, but I did install Photoshop Express which is supposed to be pretty good.  I don't use a smart phone, so this will be new territory for me to explore.  Never fear, I am not inclined to photograph my food.

I am also not inclined to talk to my computer devices.  For this reason, Siri has been banished to the attic for the time being.  Perhaps I will experiment with this feature when I discover a need and have some free time.

Tip:  If you upgrade from an older iOS device, order a Lightning to 30-pin Adaptor.  This will allow the use of the older charging cables with the new device.

I can't compel Google to fix the problems with my Nexus 7, but there is something I can do.  I think Android is dead to me.  After my terrible experience with the Nexus 7, I doubt I will ever own another Android device.  It has been particularly galling to have the OS problems go unaddressed, or even acknowledged, for an entire year.  Fool me once...

I have had no problems getting used to the new iPad Mini.  It has been a delight setting it up.  Each day brings another pleasant surprise.  I think I have my apps grouped on screens now that makes sense to me.  If I sound excited and enthusiastic about the new iPad, it's because I am.  It really is a first class, well designed tablet.  That's not the hype.  I had to discover it the hard way from personal experience.
Lifestyle Technology