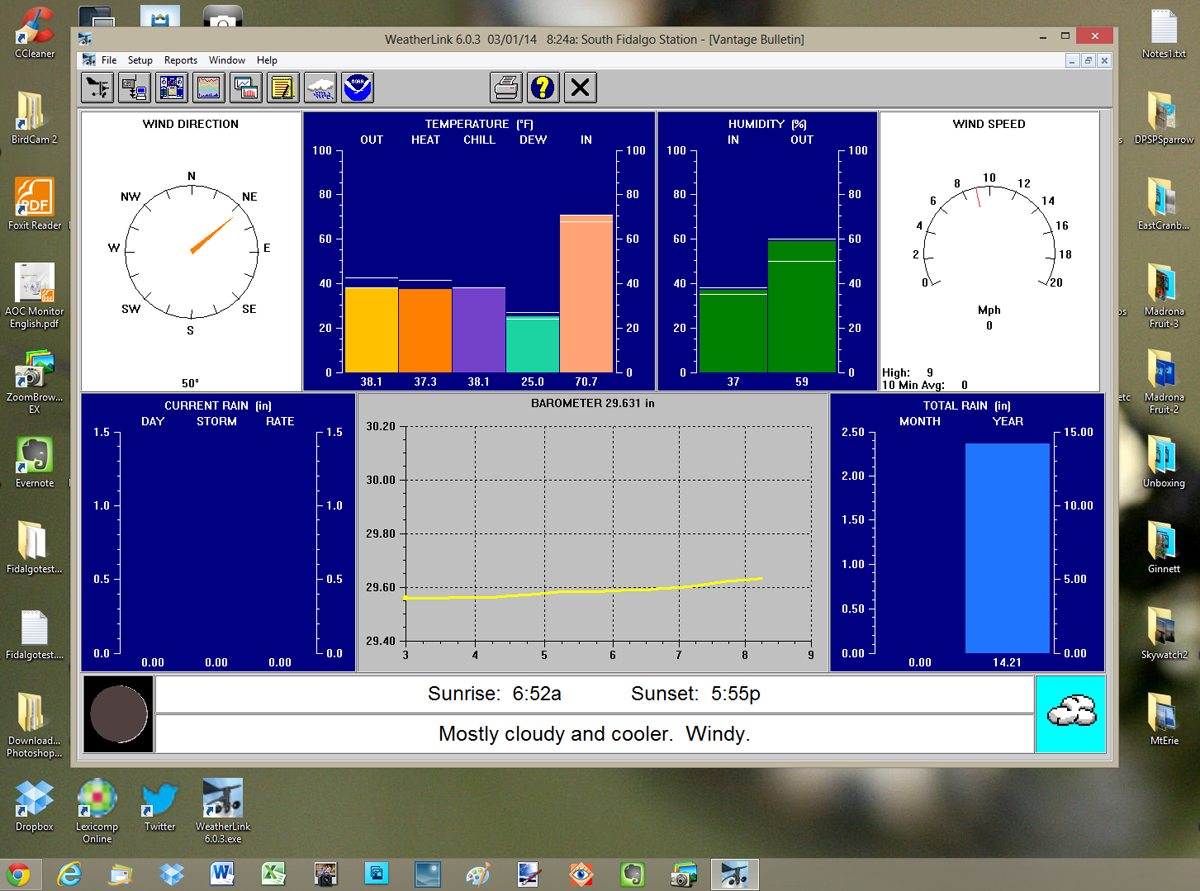 In a previous post, I described my experiences with a new Windows 8 desktop computer.  Recall that I thought all the sturm und drang over the W8 user interface was overblown and whiny.  I discovered it was really Windows 7 with this other screen thing that you will rarely use on a desktop computer.  I quickly got used to its little quirks and I have mostly enjoyed working with it.

I more or less quit using the old Windows XP desktop PC quite a while ago.  It is now almost ten years old.  Its only function lately has been as a server for my Davis Instruments Vantage Pro2 weather station.  In this capacity it has been a reliable and steadfast friend, uploading data for display on this website.  In the post "It's About the Weather," I described how all this works.

I bought the Windows 8 machine with using it for the weather station uploads in mind.  Back in 2006, getting this all up and running the first time was difficult.  A lot of trial and error, mistakes and stress was involved.  At the time, I didn't understand a lot of the terminology.  Typical of software, what they showed in the "help" files was not what I saw on the screen.  Back then, all I had available was dial-up internet service, so there was that whole issue to resolve as well.  I faced moving the station to a new computer with some apprehension.  I have been putting it off for more than a year.

Last weekend it was either snowing or raining steadily.  With the euthanasia of Windows XP looming, I decided it would be a good time to get this chore out of the way.  It turned out to be much easier than I expected.  There were some pleasant surprises as well.  I thought others might find my experiences helpful and decided to write this post.  The steps should be followed in the same order they are listed.

The first step was to install the latest version of WeatherLink software on the new computer.  According to instructions on the Davis website, first install WeatherLink from the original CD that came with the Data Logger.  In my case this was version 5.7.  Then, download the upgrade to version 6.0.3 (or whatever is current) available on the Davis website.

This step all went without a hitch.  Even the move from a 32 bit XP to a 64 bit W8 environment was not a problem.

The default location of the WeatherLink folder is C:\WeatherLink.  Inside this root folder another folder contains the station data.  In my case, this is C:\WeatherLink\FidalgoS.  The name of the folder is created when the station is first set up.  Daily weather data has been accumulating in this folder since 2006.  I post summary reports of this data on the Climate page.  It is important to not lose all of this historical information.

I was prepared for the dreaded occasion when the XP machine crashed irreparably.  I have been using software called PureSync to back up the weather station files.  Twice a day, PureSync was scheduled to copy the entire C:\WeatherLink folder to a USB flash drive.  This has been running in the background with no need for my attention.

To move the station data, all I had to do was copy the FidalgoS folder from the flash drive to the WeatherLink root folder on the new machine.

Now it was time to plug the station console into a USB port of the new computer.  In my thoughts, I realized this operation was much like an organ transplant.  The XP donor body would cease to function.  Will the organ function in the recipient W8 computer?  This was all a bit scary.  I also had to unplug the console and move it to a different power outlet.  With its battery backup it just kept receiving sensor data without a pause.

Setting Up the Station in WeatherLink

Pleasant surprise number 1:  I expected to have to go through the entire station setup in the WeatherLink software.  Because I had moved the FidalgoS station sub-folder to the new machine, that chore was unnecessary.  When I opened WeatherLink for the first time, everything was already there.  The station name, data units, latitude and longitude and even all of the internet settings were intact.  The only thing I had to do was set up the communications port (Setup >> Communications port...) and tell it to look for a USB connection.  The procedure is automated and immediately found the station port.  Without any fuss, internet uploads began to occur immediately.

Pleasant surprise number 2:  I belong to CWOP, the Citizen Weather Observer Program and upload my data to them along with my website data.  My station ID is CW8017.  In WL 5.7, it was necessary to find and specify an APRS server for the uploads.  It was sometimes risky to find a server that was reliable over a period of time.  It was necessary to check frequently to make sure it was still working.  WL 6.0.3 takes care of this problem.  At upload time, the software automatically searches available servers until it finds one that is functioning.

One way this data is used is in the WindAlert widget that appears on my Current Weather page.  As it happens, the WindAlert station designated "Deception Pass" is my own data pulled from the CWOP uploads.  WindAlert also has iOS and Android apps for mobile devices.  If you find the Deception Pass location, that's me!

This is the only step that gave me problems.  For some reason, the module would not install and "Wunderground Settings..." would not appear in the File menu.  After several tries and walking away from it for a while, it finally worked.  I don't know why. 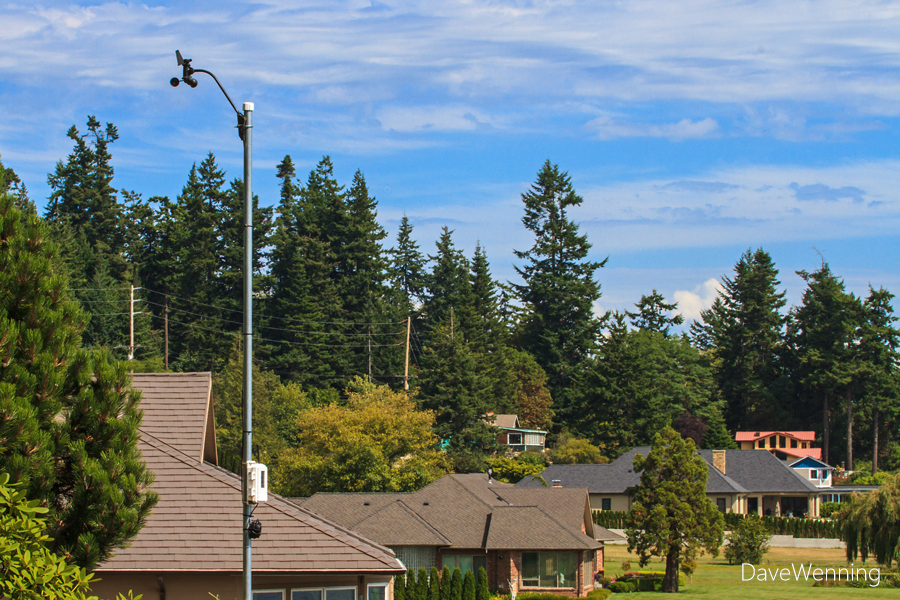 The new weather station setup has now been running for almost a week.  There has not been so much as a hiccup.  I made one setting change in the Windows Control Panel.  Windows 8 likes you to stay out of its way and take care of everything for you.  This includes downloading and installing updates and restarting the computer.  Of course, this would shut down the weather station.  I have now changed the Windows Update setting to "Download updates but let me choose whether to install them."  I am researching the procedure for automatically running WeatherLink at start up as another way to get around this.

WeatherLink running with the Intel i7 Quad Core processor is amazing.  On the XP machine, uploads could take 20-30 seconds.  A dialog would open with a progress bar showing each step of the process.  Now there is just a momentary flash.  The first time I saw this, I thought the upload had failed.  Checking the website revealed that indeed the upload had occurred.

Moving the Davis Vantage Pro2 weather station to the new Windows 8 computer turned out to be almost effortless.  Like so many things, the anticipation was worse than the reality.  If you are facing this task, my experiences might help provide for a smooth transition.