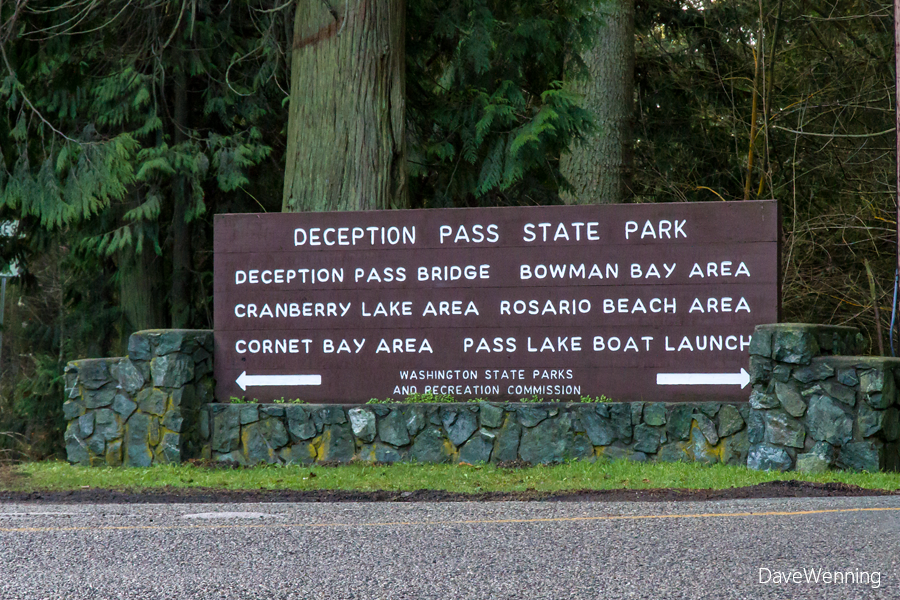 I had never explored the Pass Lake Trail in Deception Pass State Park.  It used to be a short, one-way trek which ended on Rosario Road.  From there it was necessary to either continue hiking on the road or turn around and return on the same trail.  I found neither option appealing.  On a newer map (.pdf) I noticed that it is now the Pass Lake LOOP Trail and it makes a complete circle back to the parking lot.  I decided it was time to check it out.  From Highway 20, turn onto Rosario Road at this sign (above).  Immediately turn right into the Pass Lake parking lot where there is a well marked trail head. 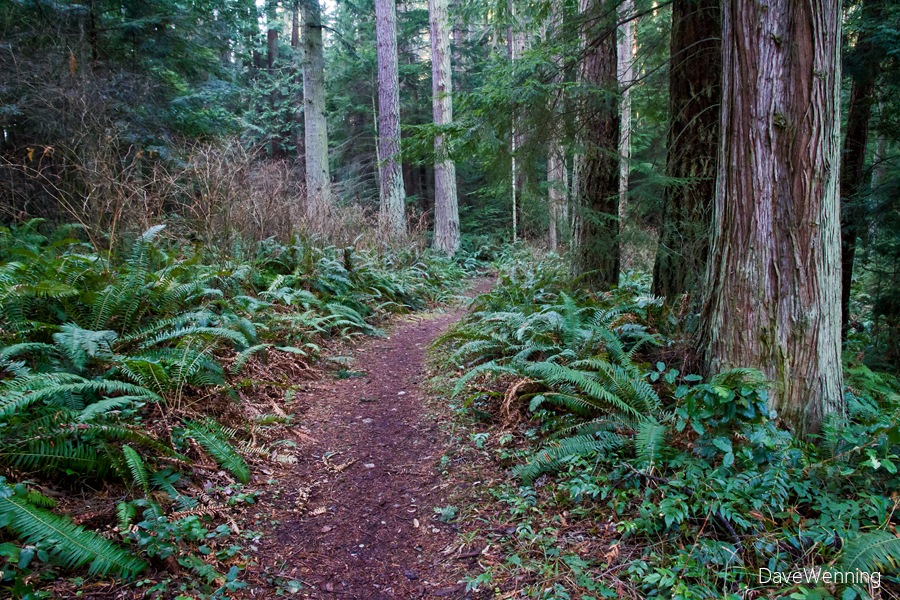 On setting off, it is apparent that this is a Northwest Coast climax forest.  The dominant trees are Western Redcedar (Thuja plicata), Douglas Fir (Pseudotsuga menziesii), Grand Fir (Abies grandis) and Western Hemlock (Tsuga heterophylla).  Where the canopy opens to let in a little light, there is Red Alder (Alnus rubra) and Bigleaf Maple (Acer macrophyllum).  I will head counter-clockwise around the loop.  There is some hilly terrain along the trail but nothing extremely steep or difficult. 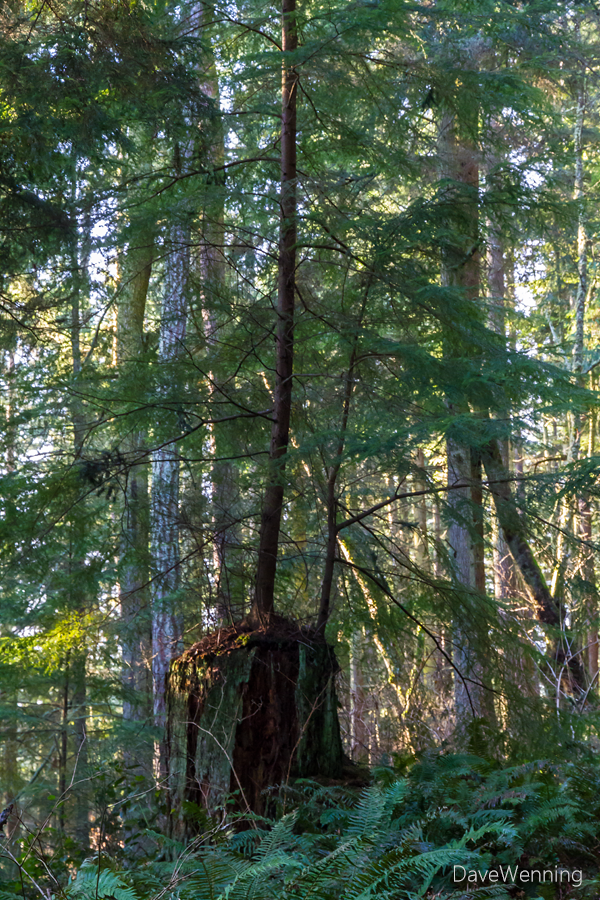 Spotting nurse logs has become one of my interests when hiking in the woods.  Rotting, wind-fallen trees and stumps serve this purpose.  As in this photo, Western Hemlock is especially associated with nurse logs.  Two of them have taken root in the stump.

One of the mysteries of the closed canopy forest is how seedlings can take root and grow in deep shade where photosynthesis is limited or impossible.  Nurse logs provide one answer.  They offer both nutrition and protection to the sapling.  Nothing in a mature forest will go to waste.  There is a constant cycle of building, dying and rebuilding taking place. 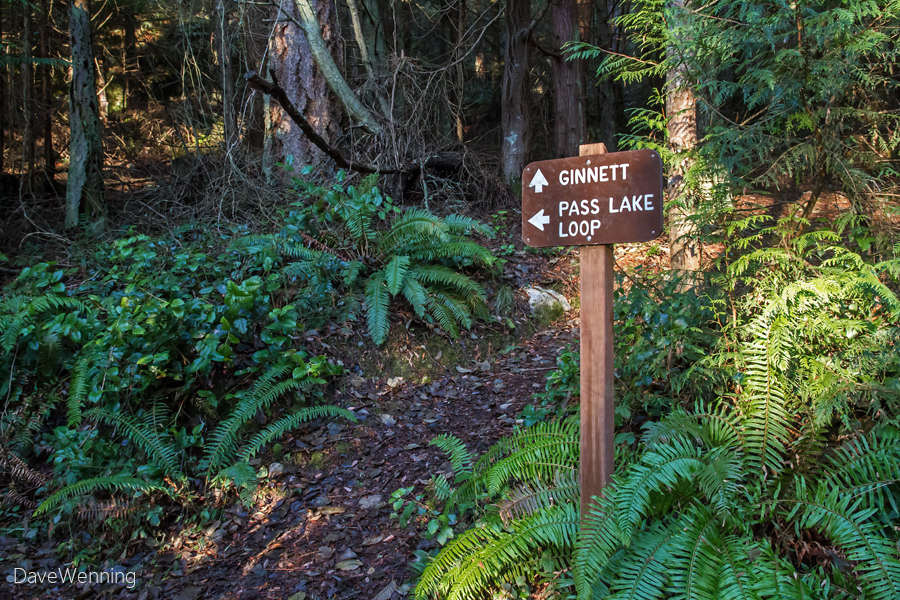 Along the way there is a spur trail that leads to Ginnett Hill.  I'll check it out some other time.  It's about a mile long.  I think it is the route to Naked Man Valley, but that's another story (.pdf).

UPDATE:  I hiked the Ginnett Hill Trail in January and it was amazing!  Check it out.


Along the way, I found the trail blocked by a big, fallen Western Hemlock, but it was easy to scramble under it.  On the other side, I noticed the up-turned root of a second tree it took down when it fell (right).  It always seems a shame when big trees like this come down.  Remember, however, in time they will decay and become nurse logs to foster new generations.  The opening in the canopy will provide light for nearby saplings to spring up and replace them.  The park sometimes uses the wood from these trees in their constructions.  A large, new sign at the main park entrance was built from such a windfall.


This lichen growing on a Red Alder looked like crunchy peanut butter (left).  Does anybody know what kind it is?  I found Deer Ferns (Blechnum spicant) growing at the edge of the trail (right). 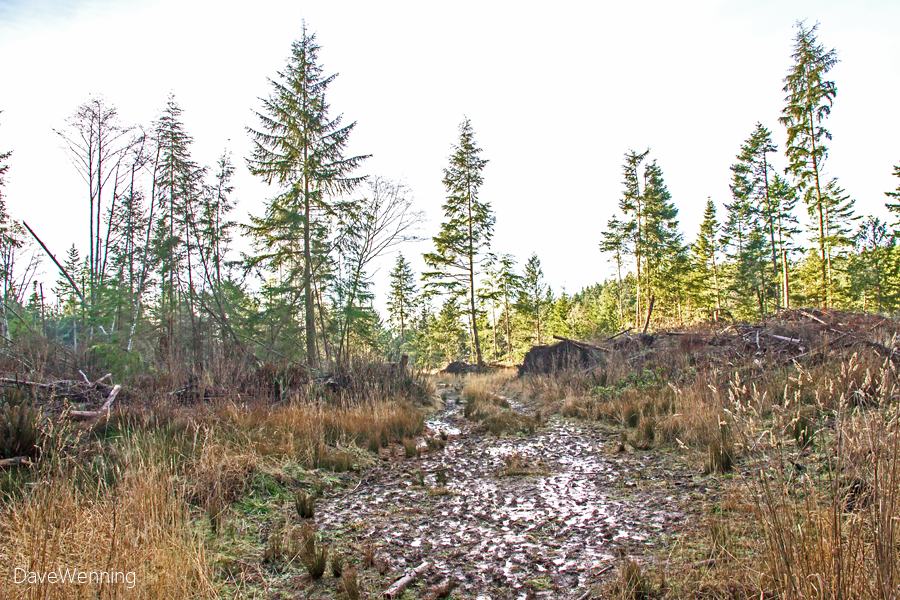 What a surprise it is to suddenly emerge from a closed canopy forest into a scrubby clearing.  I had noticed on the map that part of the trail is outside the park boundary and this must be the place.  The trail also becomes a primitive logging road with tracks of vehicles.

I realize this is not a very good photo.  The foreground is in deep, midwinter morning shade while the background is in bright sunlight.  I fussed with it more than any of the other photos to try and make it look decent, but everything is compromise.  I included it because it helps to tell this part of the story.  The landscape changes abruptly from pristine forest to rather hideous and muddy scrubland.  I found water flowing over the ground because its absorptive capacity was lost along with the trees. 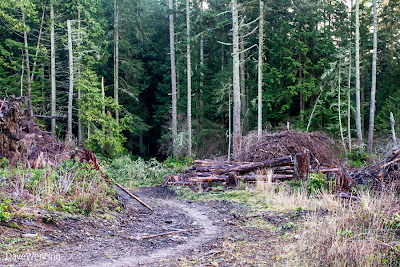 This is what can happen to a forest that is not protected.  It was easy to determine what is and is not part of the state park.


In the clearing I found piles of pure white bird feathers in three different locations (left).  Did a Snow Goose or Trumpeter Swan have an unfortunate encounter with a Bald Eagle or Coyote?  Kill sites usually include body parts such as wing joints or neck bones, but I spotted only feathers.  Perhaps the prey escaped with only a bit of missing plumage.

Exposed volcanic rock like this can be found all over Fidalgo Island (right).  Notice the straight grooves cut into the stone.  These reveal the paths of mile-thick glaciers that passed over us 10,000 or 15,000 years ago. 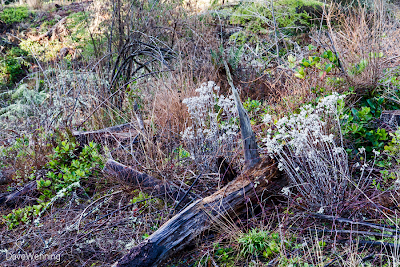 The dried flowers of Pearly Everlasting (Anaphalis margaritacea) from the Aster family provided a spot of beauty.  In time, this clearing could become a wonderful wildflower meadow if left alone.  The green patches are Salal (Gaultheria shallon) which are sprouting up all over.  There might be some interesting wildlife here as well. This looks like it could be great reptile country.  I plan to check this out in the spring and summer. 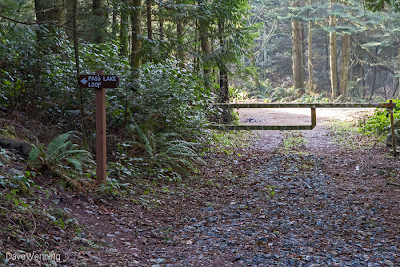 Continuing along the logging road, I began to wonder if I had missed the trail somewhere.  What a relief to find the spot where the state park trail resumes.  I think this is where the original Pass Lake Trail ended.  Beyond the gate is Rosario Road.


Getting back into the forest, I thought this section was the prettiest part of the trail.  In one spot, I found myself in meadows of moss. 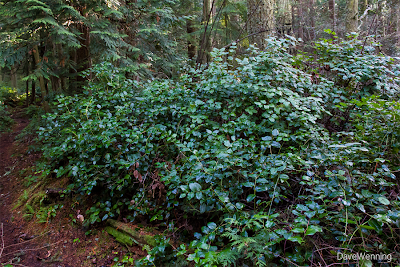 This Salal was growing way over my head, at least two meters tall.  It will grow low to the ground in full sun, but can get very tall in deep shade.  Salal is a member of the Ericaceae family along with Rhododendrons, Heather and Madronas.  It can thrive in our poor soils with the help of fungi around their roots that provide nutritional support and disease protection.


I had to include a couple more photos I took near the end of the loop trail.  Watch out for speeder bike racers here.  This is the look I am trying to duplicate in one end of my garden under some big fir trees.

I mentioned nurse logs as a mechanism for nurturing young trees.  Another phenomenon has been discovered in forests like this.  Apparently, all the trees are interconnected by a network of fungi in the soil.  Carbon produced high in the canopy by one tree can be passed down into the soil, through the fungal network to another tree that might be 100 feet away.  In this manner, the giant "mother trees" may be helping to nurture the young or stressed trees elsewhere in the forest.  Is it possible that all of the plants in this forest are "talking" to each other in this manner?  Yes, goosebumps.  I can't get this idea out of my head when walking through a forest now. 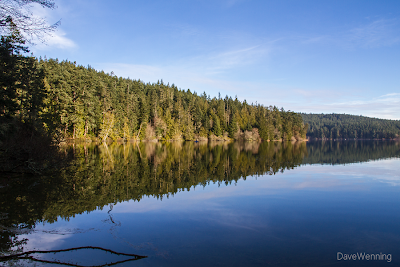 This is Pass Lake in mid-winter from near the boat launch.  Fishing is catch and release, boating is non-motorized only.  Right-click the photo to enlarge it and you'll spot a fisherman at dead center.

I worked on Christmas Day, but had the rest of the week off.  On the day after Christmas, the skies cleared providing an opportunity to get out of the house and do some exploring.  The Pass Lake Loop Trail provided the perfect outing for the day.