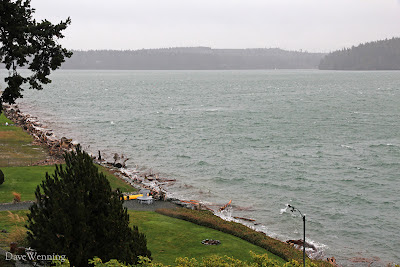 The worst of the March 12, 2012 windstorm has now passed through on South Fidalgo.  The barometric pressure appears to have bottomed at 29.327 in (993 mbar) at 9:06 AM.  Sustained winds in the 20's mph (30's+ kph) persisted through the night.  A peak gust of 33 mph (53 kph) occurred at 3:14 AM and there were several during early morning hitting 31 mph.  I woke to the sounds of driftwood logs hitting the seawall.  It's a deep resonance that vibrates through the ground and up into the house.  Since about 6:00 AM it has been raining fairly hard in our classic sideways pattern. 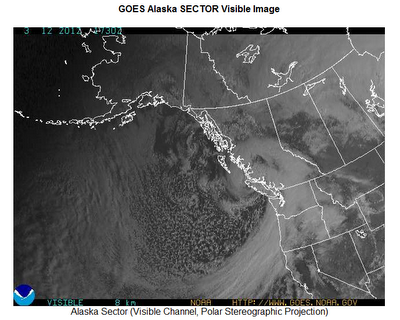 This is the regional NOAA Satellite Image at 1730 GMT (10:30 AM PDT).  It shows the spiraling storm center crossing Vancouver Island and entering the interior of British Columbia.  The mottled area over the Pacific being drawn in behind the storm is cold air.  This is why our forecasts show some snow mixed with rain over the next couple of days.  The mountains should expect heavy snowfall.  This is the typical windstorm pattern for the Pacific Northwest.  When these low pressure centers make landfall in southern B.C., the winds are drawn right up the Puget Sound basin.  As in a wind tunnel, the winds are compressed and accelerated between the Olympic and Cascade mountain ranges.

As storms go, this one was fairly modest for us locally.  We have experienced much worse.  We didn't lose power and there isn't even much windfall around the yard.  If it stops raining, I'll check out the neighborhood this afternoon.
Weather