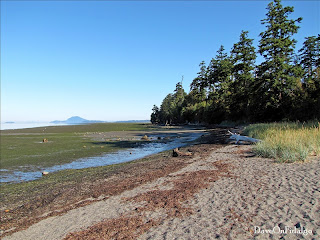 I had an extra day off on Tuesday this week and decided to check out Padilla Bay.  This is considered an estuary of the Skagit River and the entire bay has been set aside as an Estuarine Research Reserve.  The river doesn't actually flow into the bay as would be expected.  I haven't quite figured out the exact relationship.  Water from the river would have to flow up the La Conner Channel to reach the bay and perhaps this is what happens.  In the past, I suspect tributaries of the river probably did flow directly into the bay.  The river is now strictly confined by diking into specific courses.  Of course, the bay is a part of the Skagit Valley watershed.

Other than a good walk, I had no particular goal for this trek.  A previous visit was posted here almost a year ago.  My first stop was Joe Hamel Beach at Bay View State Park.  At low tide, the eel grass beds are exposed.  These provide valuable feeding habitat for shorebirds and nurseries for fish and crustaceans. 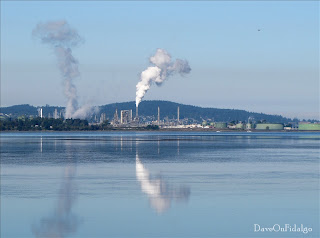 Fidalgo Island and the March's Point oil refineries can be viewed directly across the bay.  The juxtaposition of this heavy industry next to a wildlife area and scientific reserve is an amazing paradox. 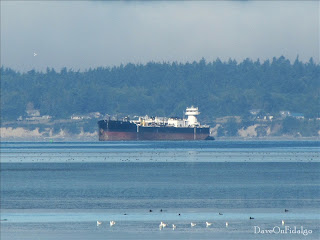 Click on this long zoom shot of the oil tanker to enlarge it.  There are dozens of little black dots, shore birds, on the surface of the bay.  Padilla is part of the Cascade Loop of the Great Washington State Birding Trail.  The bay is also a designated Audubon Important Bird Area.  There were several dozen Great Blue Herons grazing in the eel grass beds.  One, in particular, caught my eye:

Like we humans, this heron seems to have a preference for dry feet. 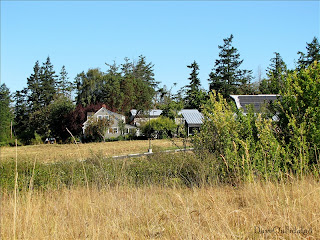 After exploring the beach, I continued on to the Breazeale Interpretive Center about a half mile past the state park.  Since 1897, this was a working dairy farm owned by John Henry and Anna Marie Breazeale.  Their daughter Edna, recalling her childhood, wished the site to be kept as she remembered it growing up.  She wanted a place where "children could see how things grow naturally."  The property was donated to the state, and in 1979, it was designated part of the Padilla Bay Estuarine Research Reserve.  The site hosts the research and visitor facilities for the Reserve which now encompasses over 13,000 acres including bay, tidelands and upland areas.


Setting off on the Upland Trail behind the Visitors' Center, I found a thicket of Rosa rugosa still in bloom.  It sported the biggest rose hips I have ever seen.  It is also called Sea Tomato for obvious reasons.  This non-native may have been planted years ago by the Breazeale family. 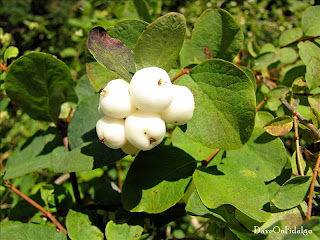 Common Snowberry (Symphoricarpos albus) is a native and dense borders of it along the trail were fruiting vigorously.  A Botanical Trail Guide is available identifying many of the plants growing along the way. 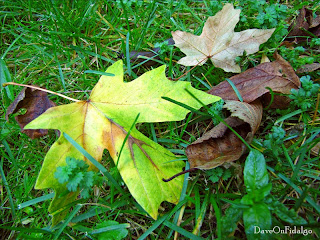 The trail enters a small forest where the dominant trees are Douglas Fir, Western Red Cedar, Red Alder and Bigleaf Maple.  The signs of approaching fall were everywhere.  Patches of Stinging Nettles had gone to seed and were dying off.  The maples and other deciduous trees and shrubs are beginning to drop their leaves.  Typical of late summer here, the woods are tinder dry.  In more than a month, we have had less than 0.2 inch/0.5 cm of rainfall. 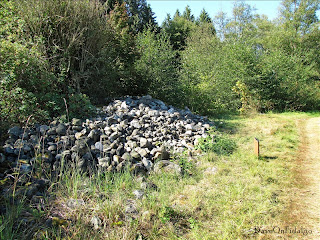 The trail emerges from the woods into open fields again.  Here an incongruous pile of stones is revealed.  The trail guide of numbered stations indicates these stones were cleaned from the fields and piled in this spot.  Reminds me of my yard.  These stones are a evidence of successive glaciations that sculpted this entire region. 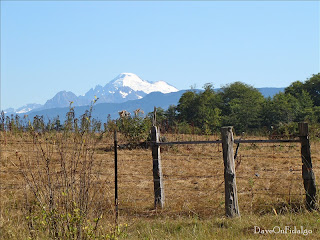 Turn around and look north from the trail for a spectacular view of Mount Baker. 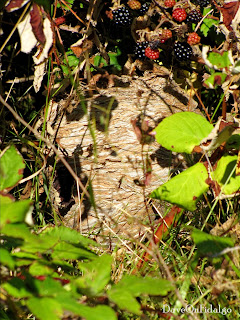 Yellow caution tape along the trail warns visitors off this Paper Wasp nest.  Polistes dominula was very much in residence.  Berry pickers beware.  These bugs can get very cranky. 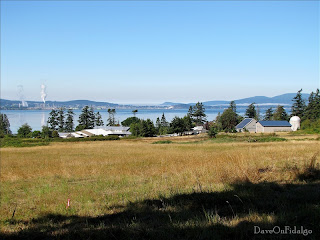 As the trail continues, we are treated to a spectacular view of the entire Breazeale Interpretive Center, Padilla Bay and Fidalgo and Orcas Islands beyond.  Students from the University of Washington and Western Washington University work and study here.  The center includes a museum and meeting rooms, library, research laboratories, barn, student dormitories and the Breazeale farmhouse which has been preserved. 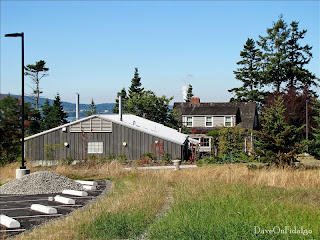 Arriving back at the parking lot, we get a last look at the laboratory building and the Breazeale farmhouse.  The Upland Trail is only about 0.8 mile /1.3 km but it is a very nice spot to spend a leisurely couple of hours.
Attractions Nature Seasons Trails