It was starting to look like a year without a summer for us.  While other parts of the country were suffering under heat waves, the Pacific Northwest was getting overcast, cold and drizzle.  In fact, July 25th was the darkest overcast day we had seen in the last four months.  Recall that I also mentioned how slowly spring seemed to be arriving as well.  Now that August is here, perhaps our summer is finally making an appearance.  The sunrise this morning showed great promise for a beautiful day.  Yesterday was magnificent:

This late afternoon view towards Saratoga Passage revealed clear skies and calm winds.  Today was a little breezier and it took a little longer to clear off, but eventually we had another nice day: 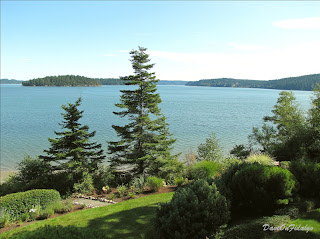