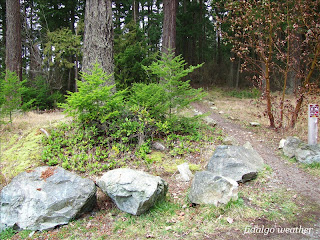 Back in December, we visited Whistle Lake in the Anacortes Community Forest Lands.  Recall that these are 2,800 acres of pristine forest, meadows and wetlands located within the city limits of Anacortes, Washington.  Networks of trails and old logging roads provide access to the interiors of the forests.  Heart Lake is another section and again we are joining a hike led by Denise Crowe of Friends of the Forest.

The trail begins at the parking lot in the photo above.  The large stone on the left has been used as a feeding station by squirrels.  Notice the Douglas Fir cone leaves left behind after removing the seeds.  On the right is a Pacific Madrona (Arbutus menziesii) showing evidence of leaf blight.  This has appeared on some of the trees around the area this year, including one in my yard.  They are very sensitive to environmental conditions.  They will most likely survive and new leaves will sprout in late spring.  These are broadleaved evergreens related to Rhododendrons.  They routinely drop last year's leaves every summer. 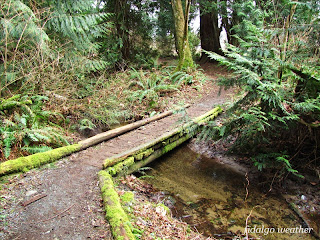 Our trail meandered through the woods and crisscrossed Ace-of-Hearts Creek several times.  The creek drains Heart Lake, flows through Anacortes neighborhoods and eventually into Fidalgo Bay.  This is a reminder that we are in the Fidalgo Bay watershed.  Whatever enters the water here, or from the urban areas along its course, will end up in the bay, the Strait of Juan de Fuca and the Pacific Ocean. 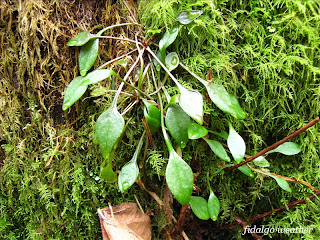 Siberian Miner's Lettuce (Claytonia sibirica) is just coming up.  They will have tiny white or pink flowers in the spring.  As the stems grow, the leaves form in opposite pairs.  Local Native Americans used them medicinally, including as an oxytocic to facilitate childbirth.  This one is growing at the base of a tree where a little soil has accumulated under the moss.

One of the show-stoppers this day was Turkey Tail (Trametes versicolor).  This is a bracket or shelf fungus that likes to grow on dead, decaying tree trunks.  The green colors are caused by algae growing on the surface of the fungus.  It is believed to biodegrade a variety of pollutants.  It also has medicinal value and one of its components is being investigated for use in treating cancer. 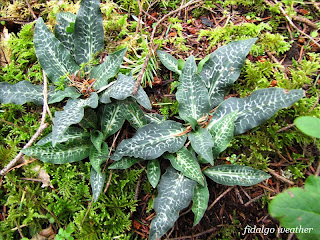 Another attractive little plant is Rattlesnake Plantain (Goodyera oblongifolia), a member of the Orchid family.  Shady, moist areas in the Pacific Northwest are hosts to several orchid species.  Later in the spring, this one will have spires of white to greenish flowers.


A second bracket fungus encountered looked like toasted marshmallows, but we were not tempted to have a taste.  I am not 100% sure of its ID.  The best I could come up with was Red Banded Polypore (Fomitopsis pinicola).  Most of the images of this one, however, had a sharper edge where orange met white.  I would appreciate hearing from anyone who knows for sure what this is.  My mycological knowledge is not up to par. 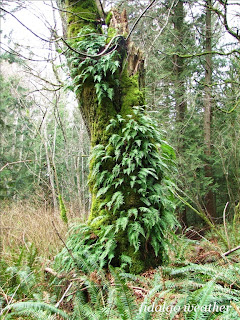 Stepping back from the plant life a bit reveals an old friend, the Bigleaf Maple (Acer macrophyllum) together with its epiphytic moss and Licorice Ferns (Polypodium glycyrrhiza).  Chewing on the fern's rhizomes yields a licorice flavor, hence the name, glycyrrhiza.  Both moss and fern like to grow on shaded, vertical rock faces but love to grow on the trunks of Bigleaf Maples.  This special relationship of moss, fern and tree becomes a mini-ecosystem seen throughout the coastal Northwest.  My blog friend Ivan has joined the Tree Year Project and will be following a Bigleaf Maple down in Oregon this year.  Check out his blog and keep tabs on the project. 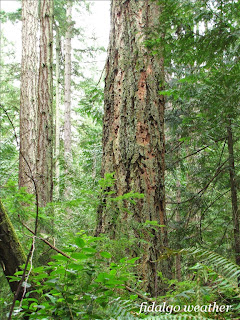 Another old friend is the Douglas Fir (Pseudotsuga menziesii) that is really not a fir.  Its scientific name indicates it's not a hemlock either.  Such an important tree deserves a better nomenclature.  This one shows borings probably created by woodpeckers.  Since there is no sap flowing from the holes, the tree has probably not suffered any real damage.  The birds remove insects and larvae from the bark which may be a benefit to the fir. 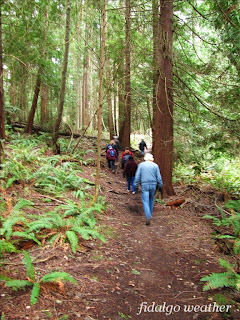 For many of us, two hours in a Northwest forest have a therapeutic effect.  The sights, sounds, smells and a brisk walk on a chilly morning offer a special, restorative experience.  Here on Fidalgo Island, we are fortunate to have the unique resource provided by the Anacortes Community Forest Lands.  We encountered a bit of wildlife on this day, and I posted about that at Wild Fidalgo.
Anacortes Attractions Nature Seasons Trails Trees
Location: Heart Lake, Anacortes, WA 98221, USA