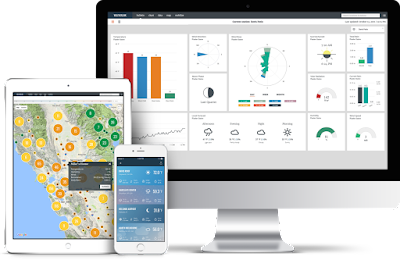 First, some history.  In 1981 I bought my first computer, an IBM PC running DOS.  I installed it in my office at work.  Using Lotus 1-2-3 and WordStar, I achieved the status of hospital tech wizard.  Memories.  About 1997,  I made the transition to Windows in which I have cruised along ever since.  For 14 years, the weather station has also run in the Windows environment.

For more than 10 years, I have also been using Apple mobile devices, iPod Touch and iPads.  Last fall, I finally replaced the old flip phone with an iPhone 11 Pro.  I've enjoyed the way they all work together seamlessly.  I also appreciate Apple's privacy philosophy.

On the other hand, I have become increasingly skeptical about Windows.  Little things like plugging in my camera and expecting the Canon window to open.  But instead, I get something called "Phone Assistant," which Microsoft installed without my permission.  Or Cortana butting into my searches and hijacking my default search engine and browser.  It took a registry hack to get rid of it.

For a while, I have pondered the idea of moving all of my computing to MacOS and dropping Windows altogether.  It could be difficult, but also provide advantages.  For example, MacOS includes well-thought-of spreadsheet and word processing apps compatible with Excel and Word.  I would no longer need the over-blown and expensive Office-365.  A single contact list would sync among all devices, phone, tablet and PC.

I knew there would be a learning curve that might take a while to get past.  I decided being locked down in pandemic exile provided the ideal time to make the move.  I ordered a base model Mac mini running MacOS X 'Catalina.'  I would use it as a learner machine and ultimately as the weather station server.

Needless to say, this is the most stylish desktop PC I've ever seen.  It was also surprisingly affordable.  Unlike the Dell which rivaled a small piece of furniture, it sits like a piece of art at the back of my desk.  I was also blown away by its performance and quickly fell in love with it.  It did not take long to learn the operating system, but it did take some Googling.  I was able to perform everything I do on a computer on the Mac mini...until I got to the weather station.  It turns out, beginning with MacOS Catalina, Apple supports only 64 bit architecture software.  The Davis Weatherlink software for MacOS is 32 bit.  In addition, the USB driver needed to connect the station console to the PC is also not supported.  What to do? 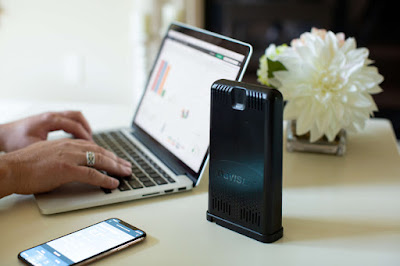 Enter Weatherlink Live.  This nondescript, black plastic pylon becomes the receiver for the wireless weather station data signals.  It then immediately routes the data to the cloud via wifi or ethernet.  I'm using ethernet which eliminates a variable.  From the cloud, the data can be routed around the internet, including to a website, Weather Underground and CWOP.  An iPhone or Android app is used to view the data in real time.  It can also be viewed in a PC browser from your Weatherlink cloud account.  So far, the device has been running without a hitch. 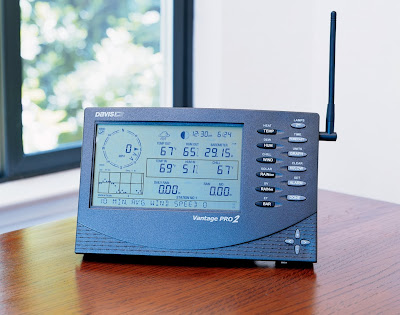 The weather station receiver and console was once the heart and soul of the system.  This is where station data was viewed in real time.  When connected to a PC, it delivered data to the internet, but complicated settings were required.  It has now been bypassed by newer technology.  Using Weatherlink Live, data can be viewed on a smart phone or tablet in much greater detail.  Gone are all the buttons and button combos needed with the console.  Delivering data to the internet has been simplified by an order of magnitude.  I am of a certain age now and retired, so "easy" is exactly where I want to be. 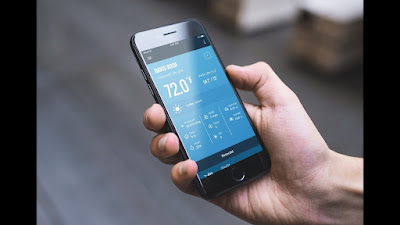 The Weatherlink smart phone app is also used for setting up the Weatherlink Live device.  In my opinion, the scathing app reviews are misplaced.  The app is attractive, modern, readable and easy on the eyes.  There is a lot of detail, but it is well organized.  I have not experienced glitches or crashes.  Next to the 30 year old LCD technology of the Vantage Pro 2 console, there is no comparison.

With the implementation of WeatherLink Live, I am now 100% Windows-free.  My conversion to Apple fanboy is complete.  In my experience, Apple is more respectful to its customers than Microsoft has ever been.  I couldn't be happier.  Now looking forward to MacOS 11 'Big Sur' coming this fall.