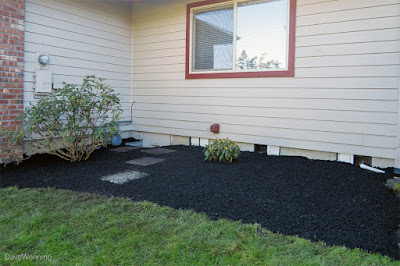 In the previous post, I described the gardens I found at the townhouse where I live now, and how they looked after the first day of landscaping work.  On the second day of work, several new plants were added to the beds.  As requested, the landscaper brought me five Rhododendron yakushimanum hybrids.  They're called "Yaks" in gardening lingo.  We planted one in the street-side bed.  Among my favorite rhododendrons, they grow to 3-4 feet high and wide.  The blossoms open a deep magenta, gradually turning pink, then white as they mature.  That little guy is obviously lonely in that bed.  I'll be doing some shopping to find him some companions that will add height, texture and color to this shady spot in front of the house.

The parent plant, R. yakushimanum comes from Yakushima Island, Japan, the namesake of the species.  The island has many features in common with Washington's Olympic Peninsula.  These include a temperate rain forest, a unique species of deer (here the Olympic elk), and a native rhododendron (the Pacific Rhododendron).  Both contain national parks and both are World Heritage Sites. 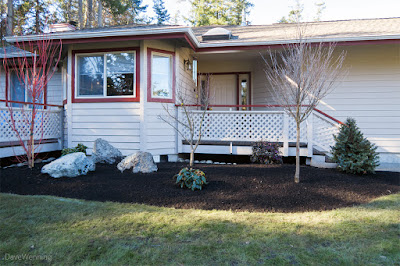 The three rhododendrons include two more Yaks, and the one near the porch is Rhododendron 'PJM' coming into bloom.  Recall how the entry garden looked when I moved in.  This is what previously greeted visitors. 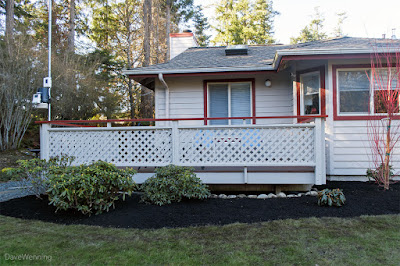 The three rhododendrons in the deck garden are now arranged in a group, rather than in a stiff-looking straight row.  At the right corner of the deck is another "Yak" rhododendron called 'Teddy Bear.'


Left:  The former straight-line borders have been softened into graceful curves for a more natural look.  The curves guide the eye to the grove of Douglas Firs in the background, bringing them into the landscape.

Right:  As seen by approaching visitors, the new plantings in the entry garden appear to be an extension of the green belt in the background.  This will be even more apparent when the new trees are in full leaf.  Click or right-click the photos to see them full size.

Both photos illustrate simple versions of "borrowed scenery" or shakkei, employed in Japanese and Chinese garden design.  Distant features like buildings or hills are incorporated into the garden landscape.  A dramatic example of this locally is Rainier Vista on the University of Washington campus.  Mount Rainier appears to be part of the campus.  But even tiny urban yards like mine can make use of the concept. 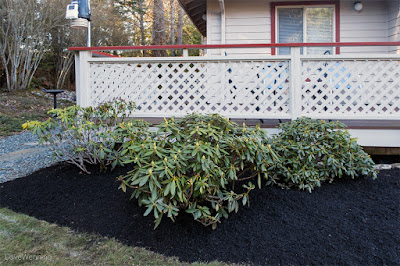 By moving one rhododendron to form a group of three, the previous parking lot design of the deck garden is gone.  The fellow on the left got an extra meal of organic fertilizer and mycorrhizae to help fatten him up. 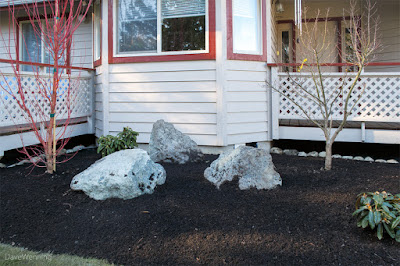 To enhance the Japanese theme, a group of three rocks was placed in the entry garden outside the kitchen windows.  This becomes the centerpiece of the garden. 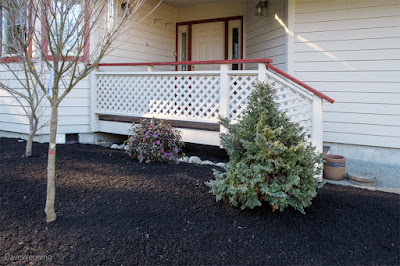 I wanted something to decorate with lights at Christmas, and the landscaper chose this Japanese Falsecypress called 'Boulevard.'  Slow growing to only 5 to 12 feet with a spread of 4 feet, it won't outgrow the space.  With a cyan tint, the soft, fluffy needles are not prickly and add texture to the garden.  In my opinion, it's perfect for this spot.

Reviewing the progress so far, all of my criteria have been met: